Posted at 14:49h in Uncategorized by Sara Causey 0 Comments 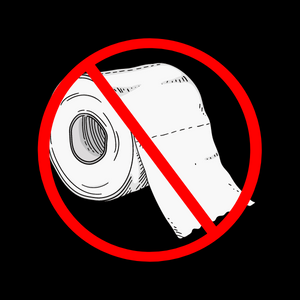 Image created by me on Canva.

Years ago, I briefly worked for a company that was on its way out. I didn’t know it at the time – during the interview process, the managers were very careful to obscure any signs of financial trouble. But once I got in, it didn’t take long to determine the place was in shambles. I don’t think the owners had much clue what they were doing and management seemed determined to pinch pennies as though that could make up for the larger financial problems. I observed:

To put it bluntly: the office was f**king gross.

“Twitter employees are bringing their own toilet paper to work as Elon Musk keeps ‘cutting costs like crazy’” –https://fortune.com/2022/12/30/twitter-employees-bring-own-toilet-paper-as-elon-musk-keeps-cutting-costs/

Wow. You mean Lord Elon can’t be bothered to buy some Charmin for everyone?

“Among his drastic cost-cutting measures, Musk canceled janitorial services this month at the company’s San Francisco headquarters, according to the New York Times. Combined with workers being packed onto two floors after four were closed, one result has been the smell of leftover takeout food and body odor lingering in the air.

What’s more, the bathrooms have become dirtier, and some employees have resorted to bringing their own rolls of toilet paper to work.” -Fortune

I’ve never witnessed the lack of cleanliness and basic supplies being a good sign. Ever.

“Earlier this month, janitors said they had been locked out of Twitter’s headquarters with no warning, after they had sought better wages and the company reportedly cut a cleaning contract.” -Fortune

So apparently, Elon wanted to cut costs anyway, so hey, in the midst of cold & flu season with RSV, strep, ‘Rona, etc., going around, why not allow the basic hygiene of the workplace to go straight to hell? Also, the janitors had the gall to ask for better pay, so eff them, too.

In the bigger picture, if someone worth billions of dollars and with the backing of govt contracts is behaving this way, what can we expect to see through the rest of Corpo America in 2023?

Will you survive a job market crash? Do you have a job loss survival plan? Check out my mini-book on Amazon for more: https://www.amazon.com/dp/B0BRC4C2SQ