Posted at 15:39h in Uncategorized by Sara Causey 1 Comment

The more the media talking heads tell us, “This isn’t 2008” or “2008 was a once-in-a-lifetime thing. It could just neevvveerrrrr happen again” the less I believe it. In fact, the more I hear that sh*t, the more I think we’re assuredly headed into The Great Recession 2.0.

Let’s take a look at the side panel of LI news as it appeared on 12/27 morning: 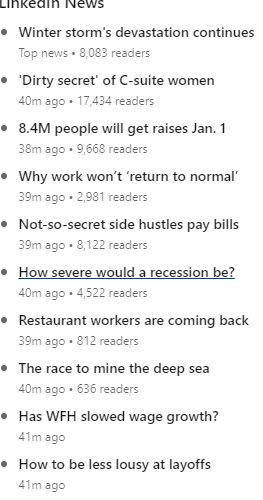 Remember when those types of headlines would have seemed impossible? Lordy, all we heard for so long was “LABOR SHORTAGE! LABOR SHORTAGE! 🦜” “No one wants to work anymore!” “The Great Resignation will go on and on.” We also witnessed the changing of the technical definition of a recession so the media could avoid saying we were in one. Now look at these snippets.

In “How severe would a recession be?” we read:

“The global economy is at a tipping point heading into 2023. The three largest economies — the U.S., China and the euro area — are ‘slowing sharply,’ warns the World Bank. ‘The picture for 2023 has darkened,’ concedes the World Trade Organization. ‘The worst is yet to come,’ declares the International Monetary Fund. But the downturn in the offing is not likely to be an economic tailspin: 58% of global business leaders say they expect an impending recession to be mild and short. In other words: This isn’t 2008.” –https://www.linkedin.com/news/story/how-severe-would-a-recession-be-5515020/

How can anyone write that with a straight face?

Here’s all of these power broker agencies saying there’s a terrible storm a’brewing, but ha ha, no worries. It won’t be 2008.

Here’s the question you’d damn well better be asking yourself: what if it IS like 2008? Frankly, what if it is worse than that?

In “Why work won’t ‘return to normal’” we read:

“After the turmoil of the pandemic, 2022 was supposed to be the year that work returned to normal. That didn’t happen, Rani Molla writes in Vox, because so few workers want to go back to the old ways. They expressed their dissatisfaction with pre-pandemic norms by quitting jobs in historic numbers, while others tried to improve their current jobs by striking and unionizing. Meanwhile, those who felt working from home had improved their lives rejected edicts to return to offices — which are half as full as they were in 2019. The pandemic shifted how people view work in their lives, Molla writes, ‘moving the needle ever so slightly from ‘live to work’ to ‘work to live.’” –https://www.linkedin.com/news/story/why-work-wont-return-to-normal-5519348/

I agree that the genie is out of the bottle for remote work. People who never had the chance to do it before and who discovered they love it DO NOT want full RTO or some hybrid hell model.

Where I sit back and stroke my imaginary devil beard thoughtfully is this notion that everyone is going to rise up in a big revolution and demand WFH. They will all go on strike, they will all sit at home unemployed, they will refuse RTO jobs, etc., for as long as it takes.

You have too many people living paycheck-to-paycheck to sit at home with 0 income for months on end in order to stick it to Corpo America. Also: do you not think these power brokers and fat cats would find a way to beat the average person? COME ON, MAN. If they have to use robots and AI, exploit immigrant labor, outsource the work overseas, etc., etc., et al., THEY WILL. There are always scabs who will cross a picket line, so imagining some sort of nationwide strike to cripple these companies for weeks or months and really sock it to them is a massive fantasy, IMO. Yeah, it feels good to think about, but is it realistic? I don’t believe so.

We could very well see something as bad or worse as The Great Recession / Global Financial Crisis. Unemployment across sectors could shoot up as it did then. Corporations will snatch up anything they want on the cheap: homes, businesses, land, assets, etc. When people are jobless, scared, and hungry, they will rapidly lose their WFH idealism and go sit in a cubicle just to have work.

I hope none of that will happen. I want to be wrong on this. In the meantime, I’d suggest you watch what the fat cats and power brokers do. Not what the talking heads in the media say to keep you pacified and quiet. Watch what the fat cats do. If they are telling their investors privately that the crap is going to hit the fan and be brutal, I’d pay attention to that much more than someone trying to delude you into thinking 2008 can simply never happen again.