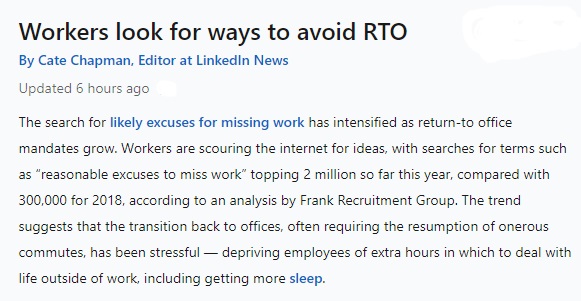 Who can be surprised by this?

WHO CAN BE SURPRISED?!?!

“The trend suggests that the transition back to offices, often requiring the resumption of onerous commutes, has been stressful”

So instead of examining WHY these bosses want RTO, we have to mock people who don’t want to go back.

Is that really the best choice when we just had a pandemic where people were put on ventilators? Or while RSV is increasing and kids are in children’s hospitals? I’m sure people who lost loved ones to Covid would find this little vignette real cute, real funny.

Wow. So this guy decided to spice it up by adding in some generational clickbait. Mmmkay.

So why not discuss WHY people are trying to escape RTO? Instead of using a tacky “cough, cough” analogy at a time when children are suffering from a respiratory virus and adults are dealing with cold & flu season, why are we not talking about the supposed “freedom of choice” that workers have now? I’ll be discussing this in more depth on Thursday’s podcast episode because I don’t personally believe “The war for talent is over. Talent won, says PwC U.S. chairman Tim Ryan.” That sounds like some serious hopium to me.

No, no. Instead let’s have a smokescreen of mockery against people supposedly calling in fake sick to avoid the office because, well, they have already proven they are capable of working from home for 2+ years now and the idea of putting expensive gas in the car to drive to an office to sit on a laptop and do the same work in a f**king cube is soul-crushing to them. Let’s don’t have a legit discussion about it. Let’s be sarcastic and drop corporate propaganda instead.

If talent had actually won the talent war, would this be going on? I don’t think so!