Corporate Ethics for the Peons, Not the Fat Cats!

28 Oct Corporate Ethics for the Peons, Not the Fat Cats!

Posted at 14:40h in Uncategorized by Sara Causey 1 Comment

It’s complicated LOL. Is it though? I don’t think so. 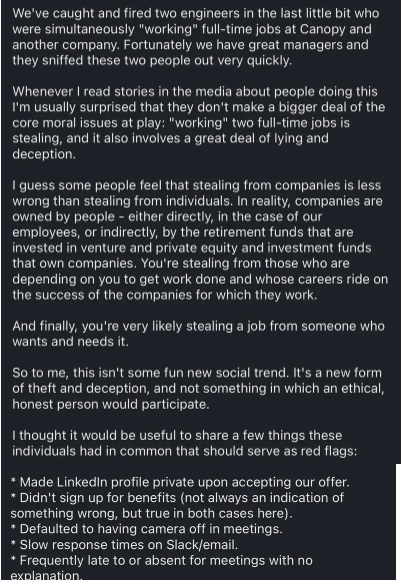 “At no point did Bell consider that people have many reasons for why they might choose to work more than one job.

For example, a single full-time job might not pay enough money to live on, which is a major problem in and of itself. For other people, their first job could actually be completed in fewer than 40 hours a week. Still other people might take on another job for the challenge.

Bell’s post went viral after being shared on the r/antiwork subreddit, which is associated with contemporary labor movements, critique of work, and the anti-work movement.

His comments exposed him to significant criticism.” (emphasis mine)
–https://www.comicsands.com/canopy-employees-multiple-jobs-stealing-2658505007.html

Well, yes. Exactly. How many of these CEOs give a damn about the reasons why? I daresay probably not many.

As of September, 63% of Americans were living paycheck to paycheck, according to a recent LendingClub report — near the 64% historic high hit in March. A year ago, the number of adults who felt strained was closer to 57%.

‘Consumers are not able to keep up with the pace that inflation is increasing,’ said Anuj Nayar, LendingClub’s financial health officer.

‘Being employed is no longer enough for the everyday American,’ Nayar said. ‘Wage growth has been inadequate, leaving more consumers than ever with little to nothing left over after managing monthly expenses.'” (emphasis mine)
–https://www.cnbc.com/2022/10/24/more-americans-live-paycheck-to-paycheck-as-inflation-outpaces-income.html

But hey – we got a business ta run, dammit. Let’s not think about WHY someone might NEED more than one full-time job. Naw. Let’s fire ’em and write a smug post on LI about how smooth we are because we caught ’em. *Insert the Porky meme here*

“Working 2 jobs is theft?! If one job paid enough 2 would be unnecessary. I worked 2 jobs and went to school and the very idea that I am being thought of as a thief angers me. I was surviving. Working to not steal or beg.” -Cyberjobmentor on Twitter

“Everything going up but the pay and people have their valid reasons for OE .. What y’all expect people to do ?” -@__SikaB on Twitter

What they expect people to do is obey. Sit down, shut up, and do what you’re told. None of this is about collaboration and togetherness. Nooooooo. It’s about obedience and compliance. If you need more than one job to survive, oh well. Figure it out on your own time. That’s your problem. Oh but if you solve it in a way we disapprove of, we’ll punish you for it.

“Interesting that a ceo can be on the board of multiple companies simultaneously but it’s the lower wage employee who’s penalized for exploiting the telework option. ‘Ain’t no fun when the rabbit got the gun.'” -@bakara_j on Twitter

“Canopy’s Bell, however, turned comments off on his post after he received a phone call from someone telling him they hope he dies in a car crash. The ‘rant’ was found and shared on r/antiwork.

The comments on that post were far less accommodating. ‘It’s yet more ‘rules for thee but not for me’ bullshit,’ one said. ‘They’re free to chase whatever profit they want in whatever manner they want but the idea of an employee being anything other than a serf bound solely to them and them alone clearly gets their blood boiling.'”
–https://www.theregister.com/2022/10/19/overemployment/

Exactly! The rules don’t apply to the people at the top. This is, IMO, another reason why they push so damned hard for RTO. They can take long lunches, go golfing on Friday, be OOO for most of December, etc. But not you. YOU had better be there butt-in-seat or else.

“The problem seems to be that CEOs can come across as deeply privileged. The hard work and enormous intellect that it may or may not have taken to get there does not matter. Bell not only lists himself as Canopy CEO but also as ‘Angel Investor (various).’ Though he told Insider that his investor gig only takes up an hour a month, this would still count as having more than one job to people on the street.

Elon Musk is CEO of Tesla and SpaceX. How does he have time for both those roles, but a lowly engineer can’t possibly perform two jobs? Note that in a scene from BBC documentary The Elon Musk Show, Musk is seen patrolling Tesla offices, complaining that staff weren’t at their desks after 9pm, but who was holding down the fort at SpaceX as he did that?

Jack Dorsey was CEO of Twitter and Block for a time. Jeff Bezos also somehow managed to helm Amazon and Blue Origin simultaneously. All this says to ordinary people is that if you’re worth billions, you can do whatever you want.” (emphasis mine)
-from The Register

Uh, yeah. I don’t like the pejorative there of “people on the street.” Let’s call a thing a thing. If someone has more than one job and is bitching about other people having more than one job, let’s put it out there. Like Malcolm Gladwell saying WFH is bad for you but not for him. Apparently if you’re a big shot, you can handle more than one job at a time. If you’re a peon or a pleb, you can’t.

“It’s commonplace for CEOs and C-suite executives to hold many titles, in addition to their primary roles. They may be the chief executive of multiple companies, like Elon Musk, sit on the boards of directors of a number of corporations or head up other organizations and entrepreneurial pursuits, such as owning a wine vineyard or startup company.

Davis Bell, the CEO of Salt Lake City-based tech company Canopy, posted on LinkedIn that he sussed out two of his software engineers who were juggling two simultaneous full-time jobs. He equated the action to stealing, lying, deceiving and cheating the shareholders.”
–https://www.forbes.com/sites/jackkelly/2022/10/17/is-it-hypocritical-for-ceos-to-hold-multiple-roles-while-white-collar-workers-cannot/?sh=4eb8cf353ca5

“Is It Hypocritical For CEOs To Hold Multiple Roles While White-Collar Workers Cannot?” asks Jack Kelly in Forbes.