Posted at 15:58h in Uncategorized by Sara Causey 2 Comments

This is the time to get strategic on who you listen to and who you get your advice from. The saying I’ve been using in my household is: let’s consume the news but don’t allow it to consume us. There is plenty of strange baloney going around the interwebs these days. Everything from, “Nothing to see here. Move along, move along.” to “The world is dying. We are entering Mad Max or Escape from New York. Everyone will get their brains eaten by zombies.” As per usual, I tend to think the truth is somewhere in the middle.

I saw this post on LI the other day and thought, “Yes but also no.” 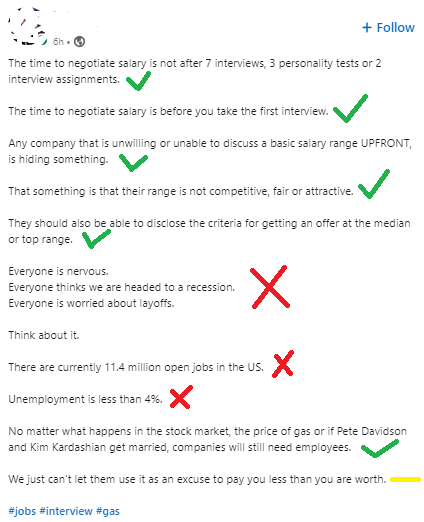 Please forgive my makeshift MS Paint markings LOL. The green checkmarks = things I agree with. Red X = things I disagree with. The yellow line = a push.

The time to negotiate salary is not after 7 interviews, 3 personality tests or 2 interview assignments.

The time to negotiate salary is before you take the first interview.

Any company that is unwilling or unable to discuss a basic salary range UPFRONT, is hiding something.

That something is that their range is not competitive, fair or attractive.

They should also be able to disclose the criteria for getting an offer at the median or top range.

Agree completely. Trying to do cloak-and-dagger BS will not fly. Candidates are not gonna stick around if a company is hemming and hawing about the salary range. IMHO, seven interviews and personality tests are a huge WOT for anyone. I mean, maybe you could justify that many interviews for the CEO of a huge company but for someone outside of the C-Suite, get real.

This I do not agree with. Sorry, I don’t. Not everyone IS nervous. Not everyone is aware that we are already in a recession now. Not everyone is worried about a layoff. Do you know how many people I encounter who still have their head buried firmly in the sand? It would depress you, quite frankly. As I’ve said before, in my area of the Midwest, a lot of home sellers are still way, way overpricing their junk houses. They want to play pretend it’s summer of 2021 and they can ask 500% more for a house than it’s worth. Are some of those houses sitting on the market with 0 offers? Yes. But some aren’t. There was a property I looked at earlier this year that was a solid $100K overpriced. The house was in OK condition but nothing else was. Fences were down. Barn was falling in. Land itself needed some significant improving. The seller wanted to do an unlisted private sale but apparently no one took the bait. So they increased the price by another $70K and put it on the market. It’s under contract as I write this. There are still people going on expensive vacations. There are still people buying silly stuff they don’t really need. So no, I do not believe everyone is worried about the economy right now.

Unemployment is less than 4%.

Yeeeaaaahhhh… I dunno about that. There’s often a lag between what’s happening in real-time versus what’s being reported to us. I personally do not think real unemployment is less than 4% right now. I also don’t think it will be long before we finally find out “officially” that unemployment is trending upward. Some of these open jobs are not really open jobs that will get filled. Some I am sure are up just for show, some are evergreen requisitions that stay posted all the time, and some are probably legit. What is the exact ratio there? I’m not sure, but I don’t believe 11.4 million jobs are truly open in America right now. I also believe that people who aren’t involved in HR / staffing work will look at statistics like that and get a false sense of security. “Oh, OK. Sounds like there’s still a labor shortage. Sounds like all is still well.” No. Nyet. Nein.

No matter what happens in the stock market, the price of gas or if Pete Davidson and Kim Kardashian get married, companies will still need employees.

Very true. I feel like this is an auspicious time to sharpen your mind, not to dull it with celebrity gossip.

Social media influencers are in business to make money. They also like to get attention and rewards from the algorithm. I’m not saying that’s what this poster did. That person probably has good intentions at heart. What I am telling you is: be careful of falling into toxic positivity. This ain’t the time for #goodvibesonly. This is the time to get yer mind right and get selfish. Look out for yourself and your family because Corporate America is gonna look out for itself.

We just can’t let them use it as an excuse to pay you less than you are worth.

I agree in spirit. Yes, Lord, yes. This is 100% true. Will they use a recession as an excuse to lower their pay ranges? ABSO-FRIGGIN-LUTELY! If anyone is telling you otherwise, I want you to caveat emptor and think critically as to whether that person is someone you want to saddle up with.

I’ve warned more times than I can count on this blog that some employers want you to “come on back to the office” and they will most definitely take advantage of things like a recession, a market contraction, higher unemployment rates, crippling inflation, etc.
–https://causeyconsultingllc.com/2022/06/07/%d0%be-%d0%b1%d0%be%d0%b6%d0%b5/

Don’t be naïve! I understand that I’m not here giving you sunshine and unicorns and lollipops. I’m trying to be as real with you as I can be so that you don’t get blindsided by what’s brewing up. It’s not fair and I get that. We don’t live in a perfect world, so you gotta be ready to play the cards you’re dealt.