What planet is this person on?

14 Jun What planet is this person on?

Posted at 13:41h in Uncategorized by Sara Causey 0 Comments

Last week, LinkedIn published an article titled, “Americans’ split view on money” and the phrasing is a bit confusing. (https://www.linkedin.com/news/story/americans-split-view-on-money-5892122/) A better title might have been, “Some people are paying attention and some will be blindsided.” In the blurb, editor Cate Chapman writes:

“Rocketing inflation may be clouding Americans’ view of the economy, but their personal finances haven’t been this good in a generation. As recently as last year, people’s optimism about their own financial well-being reached the highest level since the Federal Reserve began conducting a survey on the topic almost a decade ago — while pessimism about the broader economy also hit a record. The reasons for a sense of personal well-being abound, including an abundance of job openings:

-68% of Americans say they can cover an emergency expense, the most since 2013.
-In spite of a recent selloff, climbing stock markets have fueled increases in retirement accounts.
-The collective wealth of the bottom 50% of households has nearly doubled in the past two years.”

I immediately thought of Warren Buffet’s famous quote, “Be fearful when others are greedy and be greedy when others are fearful.” Right now, I am worried for the people who think things are pretty OK, pretty chill, pretty no worries.

“Treasury Secretary Janet Yellen acknowledged in an interview on Tuesday that she was ‘wrong’ about ‘the path that inflation would take,’ as the lagging COVID-19 pandemic and Russian invasion in Ukraine have kept prices persistently high.

During an interview with CNN’s Wolf Blitzer, the network played a clip of previous comments she made in 2021, in which she said inflation would be a ‘small risk’ and added that she didn’t ‘anticipate that inflation is going to be a problem.’

‘Well, look, I think I was wrong then about the path that inflation would take,’ the Treasury secretary said when asked about her previous comments. ‘As I mentioned, there have been unanticipated and large shocks to the economy that have boosted energy and food prices and supply bottlenecks that have affected our economy badly that I didn’t — at the time didn’t fully understand. But we recognize that now.'”
–https://thehill.com/policy/finance/3507422-%e2%80%8b%e2%80%8byellen-says-she-was-wrong-about-path-that-inflation-would-take/

“The United States is unlikely to suffer an economic downturn, despite sky-high inflation, US Treasury Secretary Janet Yellen said Thursday. ‘There’s nothing to suggest that there’s a recession in the works,’ she said during an interview at The New York Times’ economic forum.”
–https://news.yahoo.com/nothing-suggest-us-recession-yellen-213705337.html

This would be comical if it wasn’t so sad.

“I was wrong about rising inflation, but hey, y’all can trust me when I say corporate greed isn’t involved and we prolly won’t have a recession.” 😉

Is it amazing that some households are pessimistic? Not in my mind. To me, those people are most likely taking a realistic appraisal of where they’re sitting and what they see in their own areas. It’s far more astounding IMO to see people blithely unaware of what’s going on and who think The Great Resignation will last forever and every job change will yield a huge raise.

“68% of Americans say they can cover an emergency expense, the most since 2013.” That snippet leads to an article by The Federal Reserve Board, which you can find here: https://www.federalreserve.gov/publications/files/2021-report-economic-well-being-us-households-202205.pdf. Here’s the part LI is referring to: 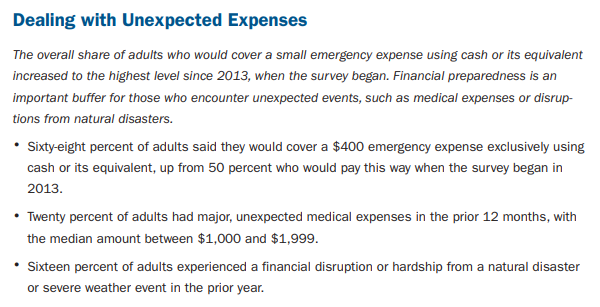 The report covered US households in 2021, not 2022. And the actual stat is that 68% of adults they surveyed said they would cover a $400 emergency (which is small in today’s inflationary economy) with cash. They didn’t say they had that amount of cash on hand, so presumably, some of these people could ask a friend or family member for a cash loan.

In March of this year, CNBC reported, “As inflation heats up, 64% of Americans are now living paycheck to paycheck.” (https://www.cnbc.com/2022/03/08/as-prices-rise-64-percent-of-americans-live-paycheck-to-paycheck.html) In January of this year, they also reported, “56% of Americans can’t cover a $1,000 emergency expense with savings.” (https://www.cnbc.com/2022/01/19/56percent-of-americans-cant-cover-a-1000-emergency-expense-with-savings.html) In CNBC’s report, they found that 44% of those surveyed would pay for a $1000 emergency expense from savings while 56% would turn to credit cards, loans, or trying to find the money from cutting some other expense.

As for the “abundance of job openings,” well, that depends on the industry. If you go to http://layoffs.fyi/, you will see new announcements every day. As a matter of fact, LI itself published an article a few days ago asking, “Is the tech war for talent over?” and it featured a pretty depressing list: 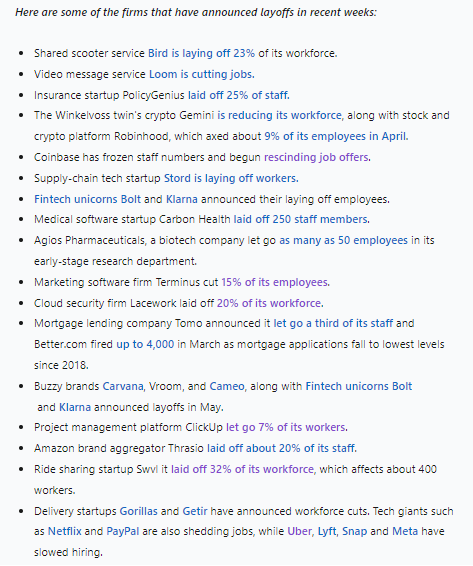 In a moment of, “What planet is this person on,” someone responded to LI’s “Americans’ split view on money” article by posting: 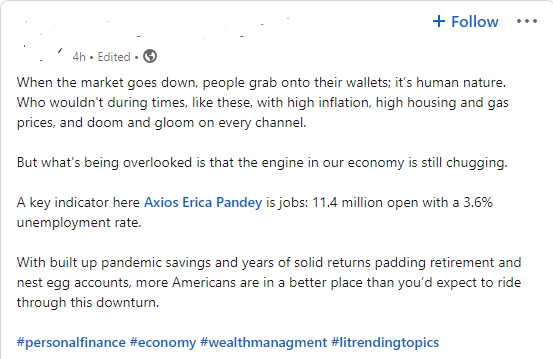 First things first, I’m not Mark Zandi, the Chief Economist at Moody’s Analytics. Periodt. I’m more than happy to concede that a trained economist knows more than I do. I’m involved in HR, staffing & recruiting work and I’ve been in the job market every day for more than a decade now. Those are the tea leaves I know how to read the best. And what I’m seeing in the job market has me shook. I’m just being honest. So perhaps a recession doesn’t hit this year, but I personally would not put my money on that. I’m seeing too many layoffs, hiring freezes, and rescinded offers to think everything’s sunshine and roses. Imagine a cop saying, “Nothing to see here, people. Move along. Move along.” Well, there is indeed something to see and it doesn’t seem good to me.
–https://causeyconsultingllc.com/2022/06/13/its-not-going-to-be-easy/

As I recommended before:

Take a good appraisal of who you’re listening to and what they’re saying. If it feels like someone is giving you advice that seems too good to be true or that goes against what basic common sense is telling you, it’s important not to ignore that. Stay alert. Prepare, don’t panic.