Apparently, if you like the idea of a four day workweek, it might be assumed that you aren’t very engaged or invested in the job. Why there is such black-and-white, all-or-nothing thinking is bizarre to me. And I wasn’t hesitant to say so. 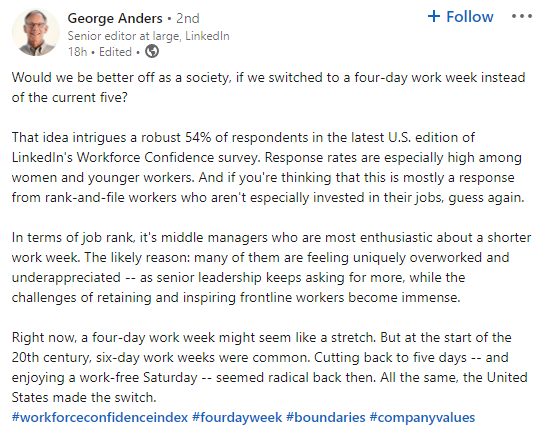 I said what I said.

The post is in reference to a LinkedIn article, “Who really wants a 4-day workweek?” (https://www.linkedin.com/news/story/who-really-wants-a-4-day-workweek-5331324/) Even the the tone of the question seems a little sarcastic, as if to say, “Who even wants such a thing?”

“Over half (54%) of U.S. workers chose a four-day workweek as one of the top three benefits they’d like offered by their employer, according to LinkedIn’s latest Workforce Confidence survey. The only option that ranked higher was greater flexibility (63%). And it’s middle management that’s driving the trend, with 59% of managers and 58% of directors listing the benefit as a priority. 55% of entry-level employees and only 43% of professionals with a title of VP or above feel the same.

Most executives recognize the four-day workweek as the best strategy to woo top talent — but just 6% said they’re implementing it or even considering it, per a recent survey by research firm Gartner.”

That last bit says a mouthful, doesn’t it? Most executives acknowledge it would be a good way to bring in more candidates, but only 6% will implement it or consider it? It would be funny if it wasn’t so sad.

This is on the same day that LinkedIn also published a delightful (she said, sarcastically) article titled, “Mediocre workers sitting pretty.” (https://www.linkedin.com/news/story/mediocre-workers-sitting-pretty-5862778/) In the blurb for that one, editor Harriet Sinclair writes:

“Enjoying your job? Get comfy – as the tightest labor market in more than 50 years see the odds of getting fired at a historic low, with some companies admitting they’re keeping mediocre staff on the books to avoid worker shortages. According to a survey of 2,000 managers by HR software company UKG, two thirds would rehire middling former employees, while 16% said they’d rehire anyone. While the Labor Department puts layoffs at all-time lows, there are fears some businesses may have overshot post-pandemic growth plans and could downsize in future.” (emphasis mine)

So here’s the real sneak preview of where this is going. Corporate America is starting to get more comfortable telling you the scoop. We’ve seen multiple high profile companies having hiring freezes and/or layoffs. CEOs are telling us they expect a recession to hit. How do all of these things connect? Glad you asked.

We’re being told that things are about to change. The balance of power is going to shift and this intensely candidate-driven market will be no more. I understand if that sounds bearish and pessimistic, but based on what I am seeing, that’s my prediction.

We see it to some degree in the article about “who even wants a four-day work week?” As if the idea of having a three-day weekend every week is so damned anathema to Corporate America. 😒 Like the very concept of it is just très offensive. But we also get an article from the WSJ about how you really need to be fired and only got the job because, ya know, Great Resignation. (https://www.wsj.com/articles/in-this-economy-getting-fired-takes-hard-work-11652907096?mod=mhp) I feel like we’re getting close to companies more overtly saying, “OK, y’all. The Great Resignation was a thing and we put up with it because y’all had a big rebellion. But that’s over now and we own you again. Sit down, be quiet, and do what you’re told.” The WSJ article requires a subscription but the byline pretty well sums up the argument, I guess: “Companies are putting up with poor performers in a tight labor market because there’s no guarantee of finding someone better.” Is it true that some employees are poor performers? Yes. I am not denying that or trying to paint some Pollyanna picture that every worker is awesome. Am I saying that companies should set a low standard and have no expectations? Nope. For me, it’s more about the overall tone and the dystopian picture it paints for the future. Like a wolf is lurking in the woods just waiting for the layoffs to start so the “bad workers” can be put out on the streets. Buu-waa-ha-ha. It’s not about coaching someone up or making sure they have the tools they need in order to be successful. Nay, nay. Anyone who is fiending for a recession clearly has some issues, IMHO. It smacks of the leaked email we saw on Reddit where an ex-manager was waiting for the turn in the labor market and the high gas prices to make conditions more favorable to Corporate America. I will echo what I wrote then:

Allegedly, it was Machiavelli who first observed, “Never waste an opportunity offered by a good crisis.” It’s important that you know this. Does Corporate America intend to keep wages high to help you make it through the coming recession? 😆 Hell no. Wayne is saying in this email what I’m sure countless others have already war-gamed out in private. “Let’s just wait for the workers to get squeezed so badly they have to come crawling back… then we’ll cut pay and ensure they stay enslaved to us. Bu-waa-ha-ha!”
–https://causeyconsultingllc.com/2022/04/22/thx-wayne/