Sometimes yes, many times no.

13 May Sometimes yes, many times no. 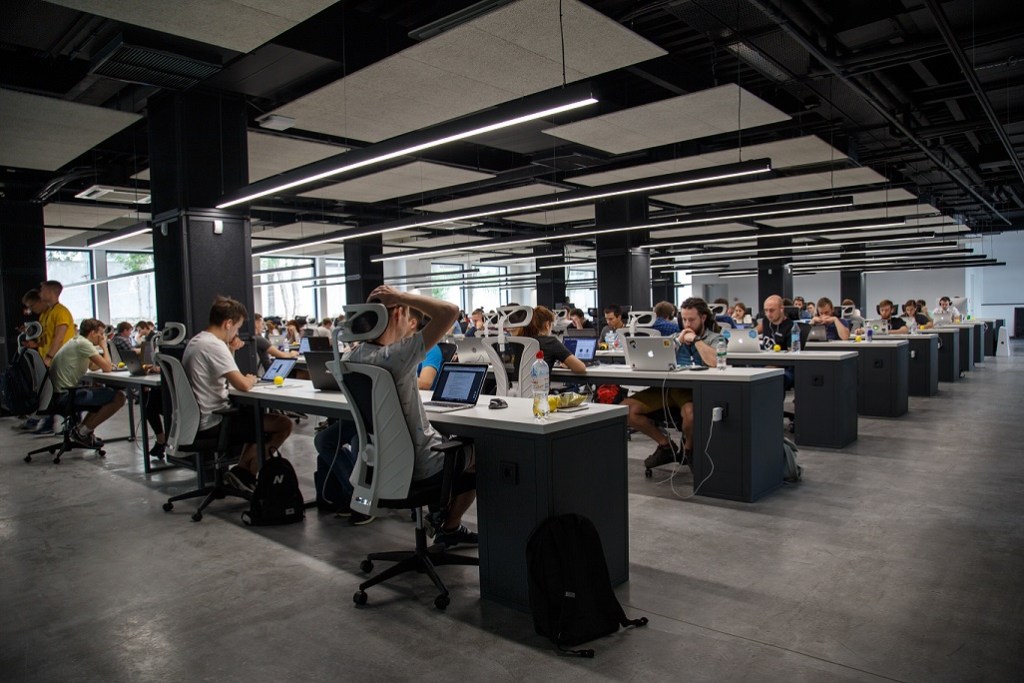 Photo by Alex Kotliarskyi on Unsplash

Ahh yes. The good ol’ cube farm. Who misses that? Prolly no one. Or at least no sane person.

Last week, LinkedIn asked an interesting question: “Teams: Do they still work?” You can find the article here: https://www.linkedin.com/news/story/teams-do-they-still-work-5846690/. Of course there were (what I would call) internet sycophants that want to give you the easy, corporate-approved answer of, “Why, yes! Of course they do!” 🙄 But do they?

My answer is more like: sometimes yes, but many times no.

“Teams make the business world go round. At least they have for the past few decades. But should we continue to give emphasis to their value as the world of work has changed so dramatically over the past couple of years? Harvard Business Review suggests maybe not and that ‘even high-performing teams incur costs.’ So what’s the alternative? Instead of teams, consider ‘loose confederations of employees who dip in and out of collaborative interactions,’ or as HBR calls them, ‘co-acting groups.’ One upside to this model is less forced team meetings and more one-on-one interaction.”

I’m not exactly sure WTH a “co-acting group” is… it sounds kinda weird, but I love the last line of that: less forced team meetings (thank you, God) and more one-on-one interactions.

The best reply to this that I saw on LinkedIn was here: 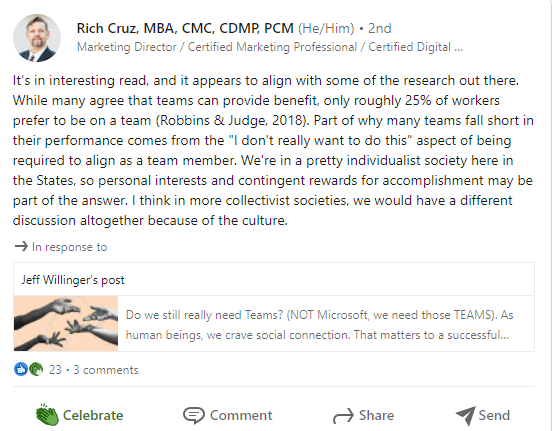 I feel like this is yet again an instance of extroversion run amok – allowing people in the minority to dictate to everyone else how they should work. If this survey is accurate and indeed only 25% of workers actually want to be on a team, then why the hell have we been forcing everyone to do it their way for all these years? One of the things I love about freelancing and owning my own business is that I get to set the terms of being an individual contributor: tell me what needs to be done and then leave me alone to accomplish it for you. It’s not about my process, it’s about the end result I can deliver. All the extroverted hoo-ha? Don’t want it, don’t need it, won’t do it. And I don’t miss it at all. I am so, so glad to be out of the Cube Farm and away from situations where I had to do things that don’t even make good business sense just to please a boss or avoid drama with a co-worker.

The HBR article that LI references can be found here: https://hbr.org/2022/04/do-we-still-need-teams?utm_source=dlvr.it&utm_medium=twitter.

Under the heading of when teams work, the “evidence” appears to be anecdotal at best:

“First, let’s take a step back to remember why we started using so many teams in knowledge work in the first place, because they’re relatively new.

White-collar teams rose to become the prominent organizational paradigm in the early 1980s as a response to technological advances and the globalization of the economy. The reason teams became so popular is because when they work, they really work. Great teams can generate creative solutions to complex problems, as well as offer rewarding experiences of camaraderie and challenge for employees. Indeed, high-performing teams go beyond just excellent work products — they also create growth opportunities for members and the kind of culture that people can’t wait to join.”

At least the next heading about when teams don’t work attempts to reference research:

“Unfortunately, even high-performing teams incur costs. These costs have been well known for decades. In a 2009 interview with HBR titled ‘Why Teams Don’t Work,’ our late mentor, J. Richard Hackman, said: ‘Research consistently shows that teams underperform, despite all the extra resources they have. That’s because problems with coordination and motivation typically chip away at the benefits of collaboration.'”

In this article, HBR cuts off Hackman’s comment before he makes a very important statement. Here’s the rest of his actual quote:

“And even when you have a strong and cohesive team, it’s often in competition with other teams, and that dynamic can also get in the way of real progress. So you have two strikes against you right from the start, which is one reason why having a team is often worse than having no team at all.”
-J. Richard Hackman, 2009 interview (emphasis mine)

Even if we look at something as silly as the typical reality TV show competition model, we see the same phenomenon play out. The host divides the group into teams. The teams perform terribly. The “worst” performer is kicked off the show and this continues until a smaller number of contestants is reached. From there, the competition goes into everyone-for-themselves mode and we see an actual competition take place. A lot of the idiotic behavior from the team competitions goes out the window and the remaining contestants get laser-focused on winning the match. Imagine that!

One of Hackman’s suggestions is to have a devil’s advocate:

“Every team needs a deviant, someone who says, ‘Why are we even doing this at all?'”

In theory, yes. In reality, however, this very often does not work. (Insert DJT’s “sounds good, doesn’t work” meme here.) As a crusty introvert and someone who’s committed to running Lean and eliminating waste, I would often try to be that devil’s advocate on a team. And ya know what tends to happen? The loudest extrovert often wins the day. Or whoever is the biggest butt-kisser to the boss wins the day. So then the person who’s an actual maverick on the team says, “Screw this” and walks away. In my case, I went out on my own to run a business in a way that actually makes coherent sense to me. To his credit, Hackman acknowledges this:

“It turned out that the teams with deviants outperformed teams without them. In many cases, deviant thinking is a source of great innovation. I would add, though, that often the deviant veers from the norm at great personal cost. Deviants are the individuals who are willing to say the thing that nobody else is willing to articulate. The deviant raises people’s level of anxiety, which is a brave thing to do. When the boat is floating with the current, it really is extraordinarily courageous for somebody to stand up and say, ‘We’ve got to pause and probably change direction.’ Nobody on the team wants to hear that, which is precisely why many team leaders crack down on deviants and try to get them to stop asking difficult questions, maybe even knock them off the team. And yet it’s when you lose the deviant that the team can become mediocre.” -2009 interview

It’s a bit like the deviant thinker is a tethered goat. “We need you to be the devil’s advocate and ask the tough questions, but it’s gonna cost you.”

So here I am, on my own blog warning you about things like corporate cults, group-think, creepy surveillance, etc. I’m a deviant thinker who had to leave the whole ball of wax!

“In one management team we studied, for example, being a team player was so strongly valued that individuals self-censored their contributions for fear of disrupting team harmony.” -2009 interview

Yeeeeeeepppppppppppppp. For quite some time, being branded “not a team player” was the kiss of death. But what did it really mean? Well, in my opinion, it meant things like:

Returning now to the current HBR article on “Do We Still Need Teams”:

Gross. I’ll happily be the deviant thinker who says, “Yeah, all of that sounds awful.” We’re back again to the emperor being naked yet expecting everyone to say he has beautiful clothes on.

In the final paragraph, the authors state:

“To repeat, we are not anti-team. In their full glory, teams are worth the investment, even today. Yet we know as well as anyone how challenging it can be to execute them successfully. All too often, teams fall below their potential. If this is the case in your organization, it’s time to think more seriously about new ways of working.”

I didn’t bury my thesis in this post. Do teams work? Sometimes yes, but many times no. So am I anti-team? Hell yeah. Absolutely I am. Teams as they have typically existed within my career have squelched creativity, promoted cult-like group-think, wasted time, and lowered productivity. How on earth could I promote something like that? I believe there is room to be collaborative and to behave in a kind, decent manner without allowing the situation to devolve into said group-think. Similarly, I think most (if not all) corporate meetings could be emails rather than cowpoke round-ups. At some point, companies need to acknowledge that it’s 2022. Not 1982 or 1992. Or even 2002. Calling everyone into some stuffy boardroom for a “team huddle-up” is really not something that most people want to do in 2022.

If you’re huffing and puffing at that reality, too bad. The global gig economy is proving me right:

The number of freelance workers is steadily increasing in the Western World. For example, the number of US freelancers is estimated to grow from 57 to 86 million by 2027 and the UK’s gig economy workforce more than doubled from 2016-2019 as it accounts for 4.7 million people.”
–https://brodmin.com/case-studies/gig-economy-case-study/#:~:text=Global%20Gig%20Economy%20is%20expected,increasing%20in%20the%20Western%20World.

Deviant thinkers, introverts, busy parents, people who don’t worship at the throne of Corporate America, etc., have more options than ever. If someone doesn’t want the cowpoke round-ups and forced teamwork nonsense, they don’t have to put up with it anymore. Companies who wish to attract traditional W2 employees will have to accept that times have changed.