Well that was depressing

11 May Well that was depressing

Posted at 22:01h in Uncategorized by Sara Causey 0 Comments 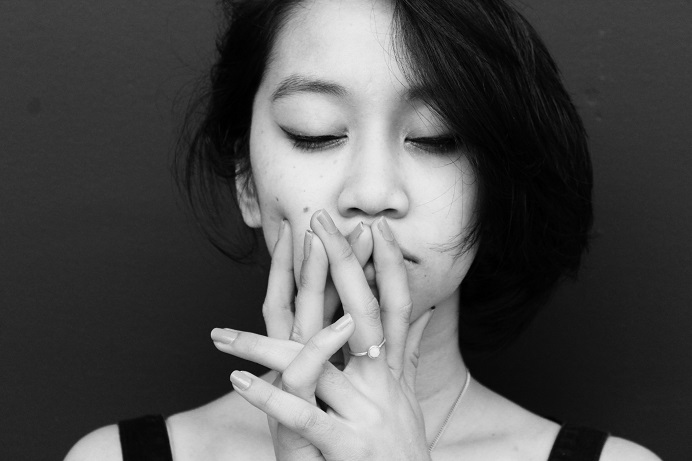 Photo by Gabrielle Henderson on Unsplash

One of my favorite moments in the film As Good As it Gets is the titular moment when Jack Nicholson’s character, Melvin, walks out of his therapist’s office and pronounces to the people in the crowded waiting room, “What if this is as good as it gets?” Such a heavy existential question wrapped inside a comedic film. Apparently, LinkedIn is asking the same question: “Is this really as good as it gets?” You can find it here: https://www.linkedin.com/news/story/is-this-really-as-good-as-it-gets-5852386/.  In the blurb, editor Cate Chapman writes:

“Some expected the Roaring Twenties, Season 2, as the pandemic exited — or eased. Well, is this it? Despite geopolitical uncertainty and galloping inflation, things haven’t been this good for workers in a long time. Too many bosses chasing too few employees has given leeway to the latter, The New York Times writes. A long bull market in stocks has enlarged retirement accounts and there are now 22 million U.S. millionaires, up from 15 million eight years ago. While these are among some of the factors that have led to higher spending, economists warn faster inflation, higher interest rates and a likely recession still loom.

Other signs of wealth:
Home values have more than doubled in the past decade.
Households have more cash than debt for the first time in decades.
Billion-dollar startups have multiplied from 200 to more than a thousand.”

It’s interesting because this article seemed to get buried as the day went on. Some responders pushed back on this thesis and the related article in The New York Times (https://www-nytimes-com.cdn.ampproject.org/c/s/www.nytimes.com/2022/05/10/business/economy-boom-times.amp.html). The NYT postulates, “For Tens of Millions of Americans, the Good Times Are Right Now.” This made many people do a double-take and say, “Wait a minute… what?!?” I thought of that Billy Joel song lyric, “Cause the good ole days weren’t always good / And tomorrow ain’t as bad as it seems.” I’m old enough to remember when that song was brand new. Oy. Anyway, these aren’t the good old days for everyone.

The NYT byline is not entirely wrong, it’s just not correct for everyone in the US: “Their houses are piggy banks, their retirement accounts are up and their bosses are eager to please. When the boom ends, everything will change.”

I feel like I’ve had a front row seat (like it or not) to this insane real estate market because I want to expand my animal rescue and rehabilitation efforts. And I have most definitely witnessed what the byline asserts: some of these people are viewing their house like it’s an ATM and they want buyers to pay through the nose. In some cases it’s like, “We didn’t plan well at all for our retirement so we want you to pay us a million dollars for making crappy financial decisions all these years.” Uhh no. As Captain America says, “No, I don’t think I will.”

I also agree that when the boom ends, things will change. I’ve been waving that banner for a while now and will continue to do so. Some of the people reading this blog post were not out in the workforce when things went completely pear-shaped back in 2008. Knowledge is power at any age and it’s important to understand that markets are cyclical and a candidate-driven job market will not last forever.

While things may be great for some people, that’s not the case for everyone as this respondent points out: 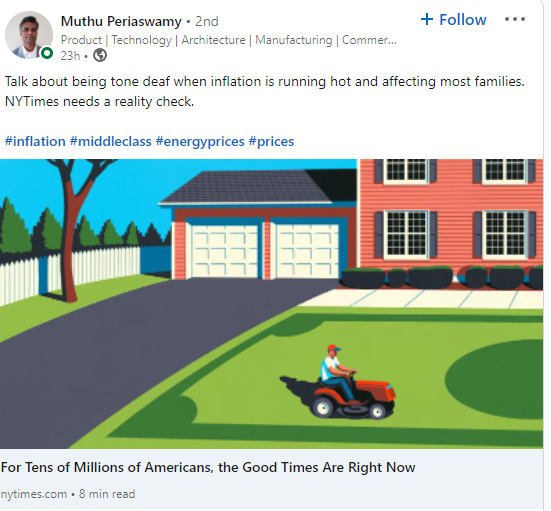 Exactly. Just a cursory glance at my current news panel on LinkedIn doesn’t bring a big burst of sunshine and rainbows: 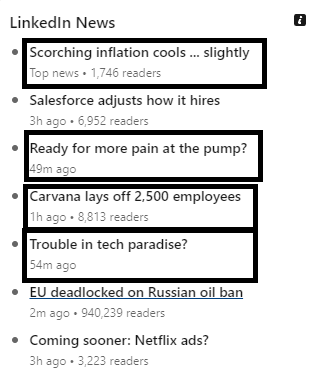 If this is as good as it gets, Heaven help us. I’m sure the people who’ve recently been laid-off from companies like Carvana, Robinhood or Netflix aren’t sitting back sipping a cold lemonade saying, “Awww yeah. These are the good ole days.”

Further down in the NYT article, we get at least a taste of some reality:

“Every economic transaction has several sides. No one thought home prices in 2000 were particularly cheap. But in the last six years, prices have risen by the total value of all housing in 2000, according to the Case-Schiller index. In many areas of the country, it has become practically impossible for renters to buy a house. This is fracturing society. Even as the overall homeownership rate in 2020 rose to 65.5 percent, the rate for Black Americans has severely lagged. At 43.4 percent, it is lower than the 44.2 percent in 2010. The rate for Hispanics is only marginally better. That disparity might account for the muted sense of achievement.

‘It’s a time of prosperity, a time of abundance, and yet it doesn’t seem that way,’ said Andy Walden, vice president of enterprise research at Black Knight, which analyzes financial data.” -David Streitfeld

Then we go back down a super weird rabbit hole:

“Those who take a boom for granted often get upstaged by reality. In May 2000, the entrepreneur Kurt Andersen said raising money for a media start-up called Inside was as easy ‘as getting laid in 1969.’ That was a few weeks after the stock market peaked. Seventeen months and one merger later, Inside shut down. (Mr. Andersen clarified in an email that he did not actually have sex until the 1970s.)

In 2000, the start-up downturn was the first sign of wider economic trouble. This time it may be simply that people are doing too well. ‘U.S. households in best shape in 30 years … but does it matter?’ Deutsche Bank asked in a research note last month.” -David Streitfeld

Does this sound like propaganda to anyone else? To me, it reads like, “Now, now, children. You’ve had it too good for too long and you just didn’t know it. Soon it will be time to pay the piper.”

As I’ve said before, markets are cyclical. What goes up must come down. If you’ve lived long enough, you’ve probably seen these situations more than once. Is it sustainable for people to want millions for shotgun shacks? No. Is it sustainable for companies to hire without any thought to job architecture or salary ranges? No. We can see that changes are afoot in the market – but is that because everyone has just had it so good and so easy for so long? Hell no.