Preparing for a long winter

07 May Preparing for a long winter

Posted at 17:11h in Uncategorized by Sara Causey 0 Comments 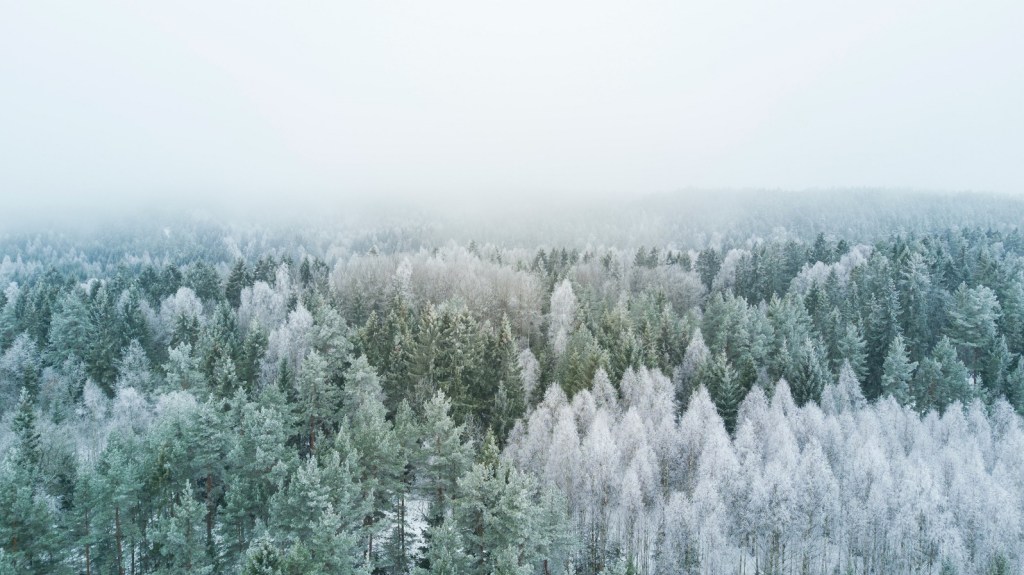 Photo by Atle Mo on Unsplash

“Now is the winter of our discontent
Made glorious summer by this sun of York;
And all the clouds that lour’d upon our house
In the deep bosom of the ocean buried.”
-From Shakespeare’s Richard III

One of the most famous soliloquies Shakespeare gives us is from Richard III. Many people are familiar with the phrase “winter of discontent.” But in this passage, Richard isn’t actually happy that his brother, Edward IV, has assumed the throne and he’s scheming to find his own way to power. In its own way, the passage tells us that the winter of discontent hasn’t really been transformed to a lovely summer… the battles have only just begun.

Yesterday, I published “Resignation Regrets…?” which you can find here: https://causeyconsultingllc.com/2022/05/06/resignation-regrets/. This morning, I opened LinkedIn and saw a heartbreaking post: 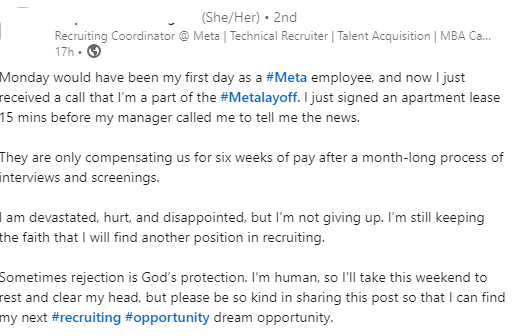 And I immediately thought of Richard III’s soliloquy about the winter of discontent. I can’t imagine how scary it must be to relocate for a job, secure an apartment, and then find out 15 minutes later that a job you haven’t even started yet is off the table for you.

It was only two days ago that Meta announced it needed to cut back on hiring. Other companies like Pelaton, Wells Fargo, RobinHood, and Netflix have recently had layoffs. (https://www.businessinsider.com/layoffs-sweeping-the-us-these-are-the-companies-making-cuts-2022-5#wells-fargo-unknown-number-of-people-in-mortgage-lending-6) I’ll be publishing an article on Monday titled “The Bear is Back” in a reference to my own bearish market predictions. I had intended to take the weekend off from writing and have a rest. Then I saw that post and thought, “No. This is too important to wait on.”

On Thursday, CNN published “Meta announces plans to slow hiring following challenging quarter,” which you can find here: https://www.cnn.com/2022/05/05/tech/meta-slowing-hiring/index.html. Obviously learning this information now is no consolation to people who may have resigned from a more stable job to go there only to find out there’s now a hiring freeze.

“Meta said Thursday it is cutting back on hiring. The move is one of several shifts the Facebook parent company is making following a period of slower-than-usual growth.

‘We regularly re-evaluate our talent pipeline according to our business needs and in light of the expense guidance given for this earnings period, we are slowing its growth accordingly,’ said a statement provided by Meta spokesperson Andrea Beasley. The company still plans to ‘grow our workforce to ensure we focus on long term impact,’ the statement said.

The company does not currently have plans for layoffs, but the hiring slowdown marks a reversal from aggressive workforce growth during the first three months of 2022. As of March 31, the company’s headcount was 77,805, up 28% year-over-year with 5,800 net new employee adds during the first quarter. Meta plans to slow or halt hiring for most mid- to senior-level positions, and recently also paused hiring early-career engineers. Business Insider first reported Meta’s plan to slow hiring.” -CNN

Resignation regret doesn’t only take the form of getting into a job and discovering you’ve been misled about the conditions. Or that the beautiful swimming pool you saw during the interview process is now a pit of toxic waste. Resignation regrets can also happen when you enter into a situation with more volatility than you expected.

I’ll be honest with you: I am already seeing the early signs in the HR marketplace. And I don’t mind pulling the curtain back and sharing some knowledge with you.

Why is this important? What does that mean? When layoffs hit, contractors and temps are usually the first to get cut. That said, if companies need to accomplish something but they aren’t feeling bullish enough to hire a FTE for it, they will hire a contractor or temp to do it. That way if they start bleeding cash, they can make an easy break. They won’t owe UI or severance pay to that temp the way they would to a full-time, W2 employee. So when you get on the job boards and see a sea of staffing agencies posting temp work, that should raise your antennae a bit.

Projects are suddenly cancelled with no updates on the horizon. Not even temps are being used. No additional hiring of any kind is happening.

The belt tightens and you can’t do anything without half-a-dozen managers approving it first. Even buying a package of printer paper.

A few days ago on TechCrunch, I saw the following article: Cameo conducts layoffs a year after hitting unicorn status. That’s a helluva roller coaster ride. From said article:

“At one point, Cameo was making impressive money — largely due to the pandemic’s impact on the creator economy and virtual life. Galanis told Variety that, in 2020, the company made a gross revenue of $100 million, up 4.5x from the year prior. Yet, as the creator economy scales and consumer tastebuds shift, Cameo’s path is clearly complicating.”

A coveted $1 billion valuation and then layoffs a year later.

So what can you do?

Well, as I’ve written before, I’m not a professional financial planner or advisor. I am also not an all-seeing oracle from ancient times. All I can do is read the tea leaves and make my best guesses. When in doubt, most def talk to a financial professional and draw up a game plan. My general thoughts:

Don’t buy into corporate propaganda or advertisements. Don’t get blinded by a flashy paycheck or “perks.” Listen to your own gut instinct, especially if it is telling you, “Hmm. Something just doesn’t feel quite right here…” Read reviews. Ask around. Do your own due diligence before you leap. I would also suggest you take a look at the stock price and the financial profile of the company as well if at all possible.

Oscar Wilde once said, “There are only two tragedies in life: one is not getting what one wants, and the other is getting it.” For some people, the idea that they missed a golden window is maddening. I’m seeing it in real-time now with the housing market. People who probably could have sold their place for an insane-o price in the summer of 2021 are listing now at absurd prices and acting butthurt that buyers aren’t biting. The interest rates have gone up substantially. Inflation is bad. Recession looms large. Ain’t nobody out here tryna be house-poor because they bought your shotgun shack for $1 mil at a 5.5% rate. Sorry. 🤷🏻‍♀️In the job market, this can manifest as someone who wants to job hop for more money “one last time” before the market tanks. Or someone who gets blinded by the glitz and glamour of something that turns out to be pyrite rather than real gold. Don’t get FOMO! Whenever you treat something as though it is the last lifeboat off the Titanic, you are setting yourself up for trouble.

There is an idea in sales of getting happy ears and only hearing what you want to hear rather than truly hearing everything the prospect is telling you. Don’t do this with the market. Unemployment has been low for a while. Companies have struggled to hire. But those trends will not last forever, mark my words.

The Great Recession of 2008-2010 sucked. I was there – I remember it. I had a job, a mortgage, a 401K, and adult responsibilities. A lot of companies froze contributions to their 401K plans. Many had hiring freezes. Some had layoffs. Whatever you had to do to hang on to your job, you did. I don’t know how else to describe it. From an HR perspective, this is a good time to plug in at a company you like and where you are treated well – and then be ready to make yourself indispensable. If you have been waiting to job hop or maybe you have already job hopped several times during The Great Resignation, I would have to wonder if it’s time to job stay rather than job hop. Use your own discretion, of course. Just be sure you aren’t giving in to FOMO. Like the people who waited too long to sell their house and they now want 2021 2.5% interest rate prices in 2022 5.5% interest rate times, the ideal, prime job hopping window may have already closed.

As Dennis Miller always says, that’s just my opinion and I could be wrong. Honestly, I hope I am. But I’m still feeling bearish out here and anticipating a winter of discontent.