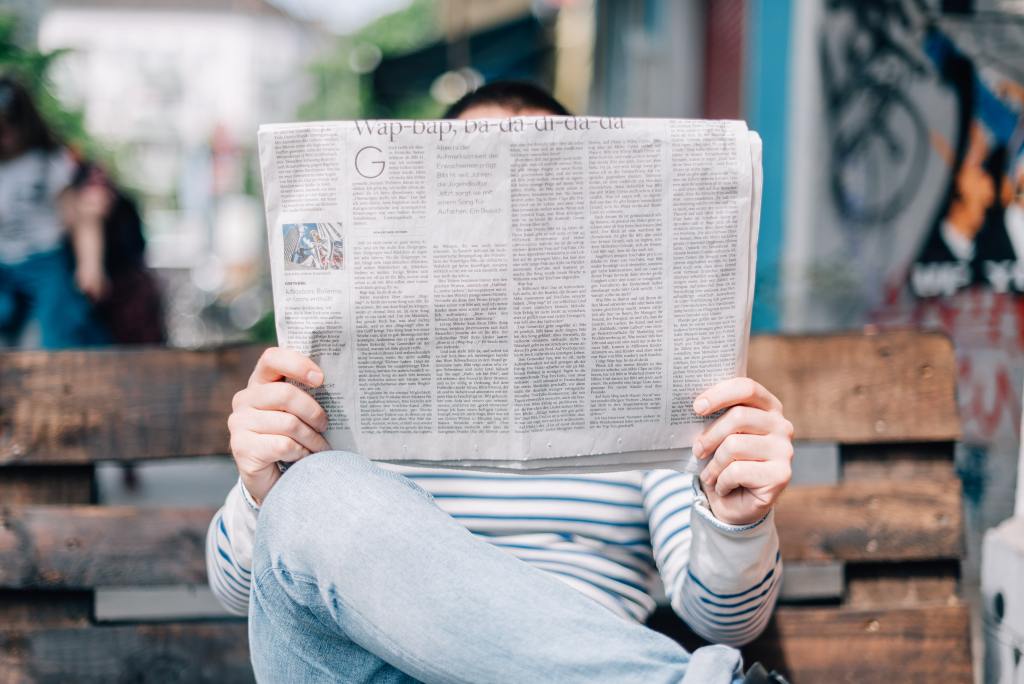 Photo by Roman Kraft on Unsplash

At the beginning of April, I wrote a post titled, “When the Pendulum Swings.” (https://causeyconsultingllc.com/2022/04/04/when-the-pendulum-swings/) And here we go.

LinkedIn published a piece titled, “US economy shrinks; recession next?” which you can find here: https://www.linkedin.com/news/story/us-economy-shrinks-recession-next-5834834/. In the blurb, editor Cate Chapman writes:

“The U.S. economy unexpectedly shrank 1.4% in the first quarter, as a widening trade gap overshadowed stronger business and consumer demand. The contraction in gross domestic product, the first since the pandemic hit, also came as companies drew down inventories built up last year to offset supply-chain snags — pushing GDP to 6.9% in the fourth quarter. After stripping out trade and inventories from first-quarter results, growth quickened to 2.6% from 1.7% in the final three months of 2021. The fastest inflation in four decades is expected to slow spending and growth this year compared with 2021, as well as prompt the Federal Reserve to keep raising interest rates.”

Unexpectedly LOL. I guess that depends on which pundits you listen to and whether you’ve had enough life experience yet to read the signals. I remember a sexist realtor spending a solid 10 minutes bragging to me about how he “speaks to the top brokers in the country” and mansplaining that the current housing bubble is not at all like the bubble that popped in 2007. Meanwhile: I was there! I bought a foreclosure home in 2007 and I was a grown adult woman in the workforce during the 2008-2010 Great Recession. I thought of that line in The Lion, The Witch and The Wardrobe: “Do not cite the Deep Magic to me, Witch! I was there when it was written.” But sure. You go ahead and peddle false BS to people, pal. 🙄

So a month ago, when I was telling you to prepare for the pendulum to swing, The New York Times wrote, “The U.S. Economy Is Booming. So Why Are Economists Worrying About a Recession?
There is little sign that a recession is imminent. But sky-high demand and supply shortages are testing the economy’s limits.” https://www.nytimes.com/2022/04/05/business/economy/recession-economy.html

Now we have: “A major recession is coming, Deutsche Bank warns.” https://www.cnn.com/2022/04/26/economy/inflation-recession-economy-deutsche-bank/index.html

“To make its case, Deutsche Bank created an index that tracks the distance between inflation and unemployment over the past 60 years and the Fed’s stated goals for those metrics. That research, according to the bank, finds that the Fed today is ‘much further behind the curve’ than it has been since the early 1980s, a period when extremely high inflation forced the central bank to raise interest rates to record highs, crushing the economy. History shows the Fed has ‘never been able to correct’ even smaller overshoots of inflation and employment ‘without pushing the economy into a significant recession,’ Deutsche Bank said.”

Instead of the dancin’ days being here again, as the summer evenings grow, it might be recession days coming back again.

So what to do? Well, for starters, don’t let any of this catch you by surprise. Knowledge really is power.

From an HR point of view, we’ve been in the throes of a major candidate-driven market. If we have a deep recession, that will change. Now, we have some managers fiending for that scenario and lusting for lower wages. Those types of managers have essentially “played along” with the candidate-driven market and the labor shortage. They never really saw it as a permanent revolution, but rather a play-act they needed to go along with temporarily until a recession hit. This is just my opinion and, as Dennis Miller always said, I could be wrong. But I’d call it a pretty strong hunch that this is where we’re headed. 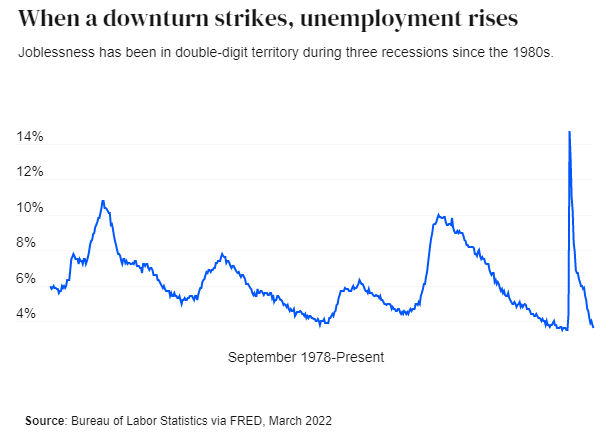 Chart can be found on: https://www.bankrate.com/banking/federal-reserve/ways-to-recession-proof-your-finances/

Even if we don’t go into full-tilt Great Recession territory with this, unemployment will go up. I don’t see any way around that. And this means that whatever roles are open at companies that are hiring will suddenly become much more competitive to land. So, first and foremost, before the Great Resignation ends, I would suggest finding a place you like and being prepared to hunker down and ride out the wave. Does this mean you need to panic and run around like Chicken Little? No. It just means that you have an eye towards the future. The Great Resignation has largely rewarded job-hoppers over job-stayers. But in a recession when unemployment goes up, the scales will shift. Why is this the case?

“Unemployment ‘rises like a rocket and falls like a feather.’ At the onset of a recession, as companies cope with diminished demand, declining profits and elevated debt, many start to lay off workers in order to cut costs.

Rising unemployment is one in a number of indicators that define a recession, and it exacerbates the downturn.” –https://www.investopedia.com/ask/answers/032515/why-does-unemployment-tend-rise-during-recession.asp

That opening line is something else to consider: when unemployment occurs, it shoots up quickly but is slow to recover.

I hope I am wrong, but I think we need to buckle up and be prepared for a bumpy ride. We may be in for a summer or a winter of discontent.