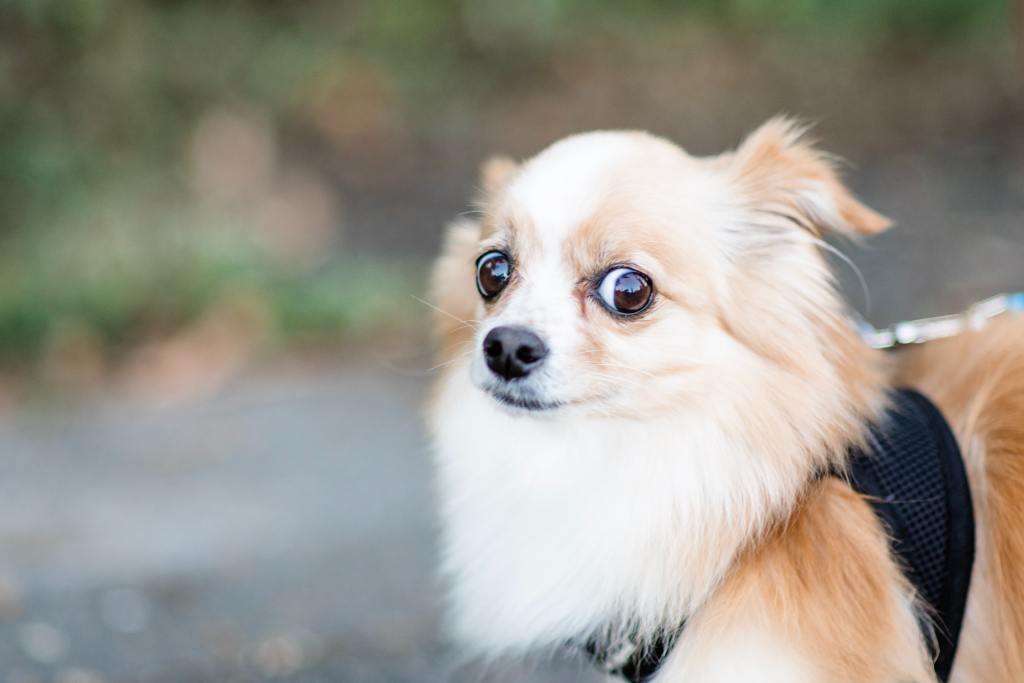 Photo by Michelle Tresemer on Unsplash

Skeptical dog is skeptical. And a bit scared.

Last week, I wrote about LinkedIn’s headline re: bosses want your camera on. (https://causeyconsultingllc.com/2022/04/18/engagement-or-surveillance/) The headline seems to have changed now from, “Bosses want your camera on” (https://www.linkedin.com/news/story/bosses-want-your-camera-on-5808914/) to “The case for no camera on Zoom,” which you can find here: https://www.linkedin.com/news/story/the-case-for-no-camera-on-zoom-5836154/. What a difference a week makes, huh?

Well, in truth, I think this is more of a Wayne situation: enough backlash made the interwebs reconsider.

In the blurb for this article, editor Laura Entis writes:

“Executives want to see employees on Zoom meetings. In a recent survey, 93% said those who didn’t use their cameras were less engaged. But while rows of black squares can be jarring, there are valid reasons why some workers are opting for video off, audio off during video calls, per Quartz. Zoom fatigue, meeting overload, messy backdrops or the desire to fit in rote tasks like weight lifting or laundry-folding can motivate workers to keep their cameras off without negatively impacting engagement or productivity. Rather than simply dictating cameras must be turned on during all Zoom meetings, a better solution might be for execs to ‘reconsider their attitudes towards multitasking during meetings,’ including creating an environment where it’s acceptable to visibly perform other tasks while on a video call.”

Yeah, or– and hear me out here– perhaps they can reconsider the necessity for the meeting, period. Instead of meetings about meetings to have more meetings and wasting a lot of time with a Zoom call that could have been an email, maybe consider whether everyone needs to have their workday interrupted for a Zoom meeting anyway. 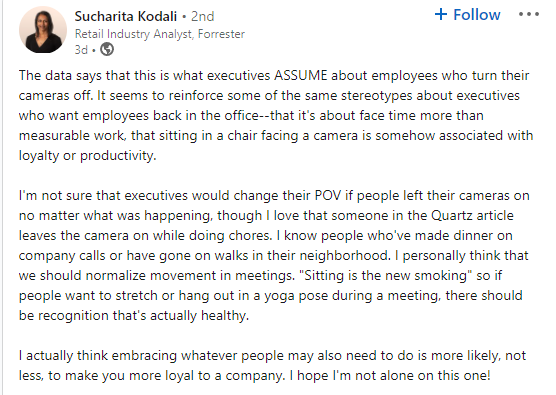 Yep, yep, yep. This. “It’s time for y’all to ‘come on back to the office’ because the execs want to see you butt in seat and make sure you are going through the pantomime of work.” Yuck. I’ve had several walking meetings in my career and at the very least, they were more stimulating than sitting in a stuffy boardroom checking out from reality. Just because someone is sitting in a chair with the camera on does NOT mean they are engaged. Likewise, if someone is walking in place or folding laundry during a Zoom call that could have been an email, it doesn’t mean they aren’t absorbing the info. This is especially true I would think on some daily or weekly “cowpoke round-up” where the manager is probably repeating things everyone already knows anyway. 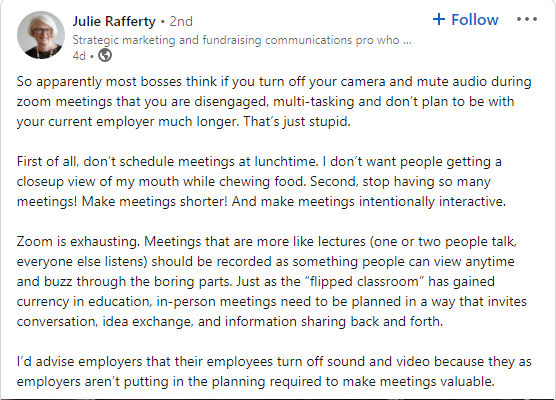 I agree with the overall spirit of this post. Julie loses me for a moment at “making the meetings interactive” because, in my experience, that leads to a lot of extroverted hoo-ha that I loathe. And that accomplishes nothing. Do I want to have a three-legged race meeting or a “let’s toss the football around the bullpen while we jabber” meeting? Lord no. Absolutely not.

But Zoom IS exhausting. Much more so than an email, text message, or phone call. It is also much more of a time drain than those other tools.

The LinkedIn article references this one, which appeared on Quartz: https://qz.com/work/2155974/in-defense-of-multitasking-during-meetings/. In the opening paragraphs, Sarah Todd writes:

“Bosses tend to put a lot of stock in face time. But the rise of remote and hybrid work during the pandemic has pushed some companies to check their culture of presenteeism, and to acknowledge that employees’ productivity and performance often has little relationship to the amount of time they spend at the office.

That said, even bosses that have become more accepting of remote work may still care about a different kind of face time: Employees keeping their cameras on during virtual meetings.”

Face time. 🤢 That term goes on my list of abhorrent corporate speak along with:

So what’s the deal here, really? Glad you asked (rhetorically, at least). The Quartz article references another one (sorry for all the rabbit holes) from MIT Sloan, “Why Showing Your Face at Work Matters,” which you can find here: https://sloanreview.mit.edu/article/why-showing-your-face-at-work-matters/. Admittedly, the article is 10 years old and things have most certainly changed due to Covid.

My apologies for yet another rabbit hole, but the MIT Sloan article quotes one from Jack and Suzy Welch that appeared in Business Week back in 2007. Even though that one is now 15 years old, it is quite telling:

“Companies rarely promote people into leadership roles who haven’t been consistently seen and measured. It’s a familiarity thing, and it’s a trust thing. We’re not saying that the people who get promoted are stars during every ‘crucible’ moment at the office, but at least they’re present and accounted for. And their presence says: Work is my top priority. I’m committed to this company. I want to lead. And I can.” (emphasis mine)

Ay and that’s the rub. Right there. Too many managers equate butt in seat not only with productivity (which is the ostensible veneer) but with commitment. And not just commitment but cult-like commitment. Imagine a zombie with spiral eyes chanting, “This is my top priority. I’m committed to this company” over and over again. 😵

In light of the pandemic and the Great Resignation, is this kind of thinking utterly laughable and archaic? Of course. BUT: you still need to be aware of what goes on behind closed doors. It was only last week that the LinkedIn headline was, “Bosses want your camera on.”

-It’s not about engagement. It’s about surveillance.
-It’s not about multitasking. It’s about having too many meetings in general and being butthurt that people don’t want them.
-For some companies, it’s not about the end result and the actual work product. It’s about obedience. Do you toe the line and sing the company song and show up freshly scrubbed with the bright eye for your 20th Zoom call of the week?