I’m passionate about exposing cult-like tactics used in Corporate America, the Digital Panopticon of surveillance masquerading as “togetherness” or “engagement” and Workplace Feudalism. Why? Because I think people need to peek behind the curtain and see how the world really works. Like the phrase caveat emptor = let the buyer beware, I think employees and freelancers must do the same. Maybe, just maybe, with enough exposure, companies will change. Maybe.

Here’s a little gem that certainly shows us the mentality of Workplace Feudalism that occurs behind the scenes. 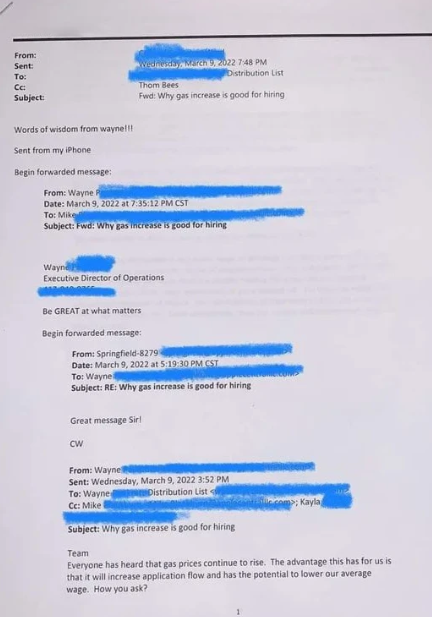 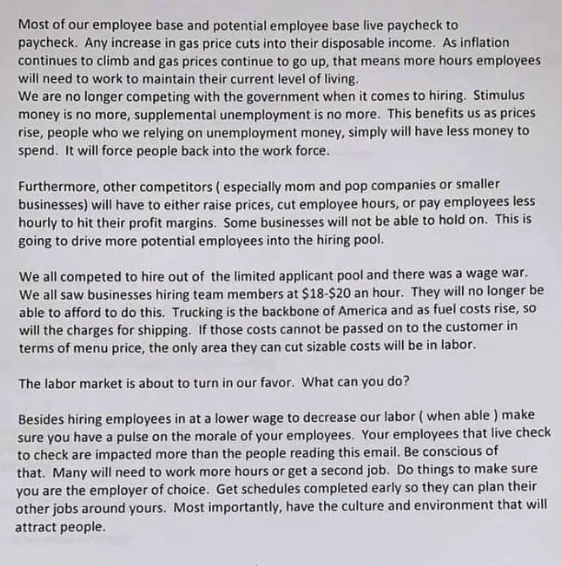 Can’t you just imagine Mr. Burns from The Simpsons smiling eerily as he applauds the rise in gas prices?

Apparently, everyone else online could imagine it and vocalized their anger over his greedy mentality:

Wayne Pankratz Applebee’s exec screws over the little guy (NSFW – but he is completely honest about how CEOs care about the bottom line, not you)

One wonders though: had this email not been leaked – had the public not found out and roasted this guy online, what then? What would have actually happened if all of this stayed private? And that is something I want you to think about because this is what truly happens behind closed doors. For every disgusting conversation we’re made aware of, there are hundreds more we don’t gain access to.

A few notes in free-form here:

Allegedly, it was Machiavelli who first observed, “Never waste an opportunity offered by a good crisis.” It’s important that you know this. Does Corporate America intend to keep wages high to help you make it through the coming recession? 😆 Hell no. Wayne is saying in this email what I’m sure countless others have already war-gamed out in private. “Let’s just wait for the workers to get squeezed so badly they have to come crawling back… then we’ll cut pay and ensure they stay enslaved to us. Bu-waa-ha-ha!”

“Some businesses will not be able to hold on.” Whenever possible, support small businesses. If the mom & pop shops go away, we will all be left with huge conglomerates and will be at their mercy more so than we already are.

These people live paycheck to paycheck but, like, so what? Let’s make sure we get our schedules done early so that we take priority over all the other jobs they have to work. 🤦‍♀️

Have the culture that attracts people… meanwhile, this is the kind of strategizing that’s going on behind the scenes. I think back to the podcast episode I recorded about the NXIVM cult. Cults don’t roll out a red carpet with neon lights and say, “Hey! We’re a cult. We’ll put you in sex slavery and ruin your life. Do ya wanna join up?” No, no. NXIVM operated a business/self-improvement course called “Executive Success Program” as a gateway to the rest of it. That sounds completely benign and harmless. Company culture in so many cases is just a bullsh*t veneer. This has become clearer to more people as WFH became the common situation for most office workers during the pandemic. I think what Wayne is describing as a “culture and environment that will attract people” is about only that: attract them in but then pay them lower wages because they have no other choice.

The market will change. At the risk of sounding bearish and pessimistic, I want to wave a banner to warn you in advance. A recession is on the way. I don’t see any way around that. And the power brokers of the country know this, too. They’re already salivating for the market change when they can yank away the higher wages and have the home field advantage yet again. So… what to do? Earlier this month, I wrote a post called When the Pendulum Swings, which you can find here: https://causeyconsultingllc.com/2022/04/04/when-the-pendulum-swings/. I’m not an all-seeing oracle, Lord knows. But I would suggest: preparation; living beneath your means where you can; and finding a good place to hunker down and stay awhile. When the bottom drops out, you don’t want to be at the mercy of people like Wayne who are standing back waiting to exploit both you and the dire economic situation.