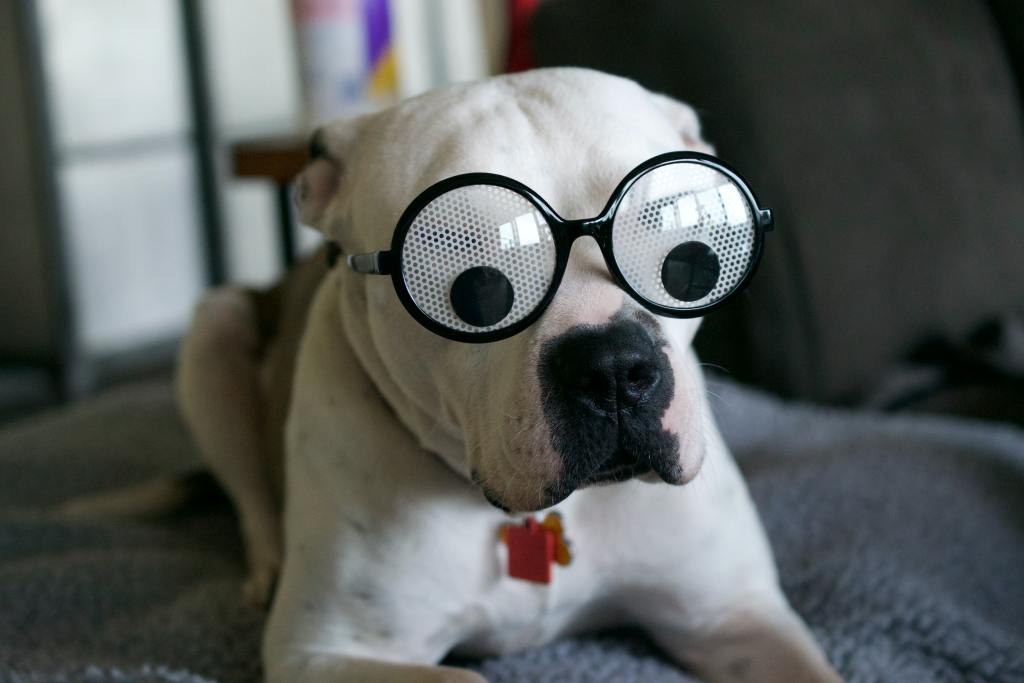 Photo by Jane Almon on Unsplash

“We allowed you to work from home even though we hate it. So now we want to punish you by forcing you to have no boundaries and reply to Slack messages at 10pm.” Signed, Awful Companies

LinkedIn recently published an article titled, “More meetings, less ‘me time'” and you can find it here: https://www.linkedin.com/news/story/more-meetings-less-me-time-5803218/.

“As the remote work revolution careens into its third year, our work and home lives are becoming evermore intertwined and indistinguishable, The Atlantic writes. An overabundance of meetings and a fuzziness around finish times means work tasks are being completed ‘amid a sea of chores, meals, mental breaks’ and other obligations. According to Microsoft (LinkedIn’s parent), this is lengthening the average workday — up 13% since March 2020 — and pressing workers to carve out a late-night hour replying emails and Slack messages. Microsoft researchers dub this new phenomena ‘triple peak day,’ with many people finding they are circling back to their laptops in the late-night hours after dinner and suddenly ‘working almost as much at 10pm as they were at 8am.'”

There’s a lot here. I’ll just have to take this one in a stream of consciousness style:

-At least LI is publicly acknowledging here that Microsoft is its parent company.

-People may not have been doing chores or laundry in the office, but they were most certainly taking “mental breaks” even in the Cube Farm. I once worked with a guy who was a master at zoning out. He could almost achieve full spittle-coming-out-the-side of his mouth status at times. I worked with another guy who slept in the bathroom. He didn’t think anyone knew, but we all did.

-Why are workers feeling “pressed” to “carve out a late-night hour replying emails and Slack messages” anyway? No offense meant here, but I have no use for Slack whatsoever. None. I think it is a huge time-drain for a lot of people and in many cases, it’s simply another tool of the Digital Panopticon to surveil you and ensure your green light is on at all the right times. 🤮 Lest you think I am the only sensible curmudgeon in the world, other people feel the same way:

“Then they heard about a slick new instant-messenger service named Slack that promised to streamline office communication: ‘There was this hype, so we decided to try it.’ Once the team switched to the tool, the rate of back-and-forth messaging intensified, eventually reaching a stressful peak when a demanding client insisted on the ability to directly communicate with Sean’s employees using Slack. The team soon burned out, and two engineers quit. In desperation, Sean moved the company off Slack. When I spoke with him, some time had passed since this incident, but the memory of the service’s omnipresent notification ping remained strong. ‘I hear that sound, it gives me the shivers,’ he said.” –https://www.newyorker.com/culture/cultural-comment/slack-is-the-right-tool-for-the-wrong-way-to-work  Good for the engineers who quit! Nobody should have to put up with that nonsense.

“The app may have a loyal band of followers but neuroscientist and lecturer, Lucas Miller is certainly not among them. As a lecturer at Haas School of Business at Berkeley University and co-founder of productivity consultancy, Stoa Partners, Miller warns students and clients on the dangers of getting hooked on Slack.

‘Technology advances usually supplant what has come before but Slack hasn’t, it’s just doubled the pain,’ he says. The problem, Miller explains, goes beyond the inconvenience of monitoring another inbox. He sees Slack as a particularly ‘scary offender’ in stopping people getting their work done because it encourages them to be constantly distracted. It’s scary because messenger-based systems directly tap into how humans seek to reward themselves, and the long term result is unhealthy.” –https://www.wired.co.uk/article/slack-ruining-work  Yeeeeeeepppppp. If you are a freelancer or you own your own business and you do not want to get pulled into this vortex, just say no. The onus is on you to protect your own time and energy and to work in a way that is most productive. Here’s a bite of a reality sandwich: sometimes clients don’t know what they don’t know. They may have good intentions and they may really think asking you to camp out on a Slack channel is helpful. Or they may be micromanagers who intend to nitpick the fire out of you. Either way, don’t do it if you don’t want to. It’s so often more of a time drain than it’s worth.

The LinkedIn article references another one published in The Atlantic titled, “This Is What Happens When There Are Too Many Meetings.” (https://www.theatlantic.com/newsletters/archive/2022/04/triple-peak-day-work-from-home/629457/) The author, Derek Thompson, writes:

“In particular, I’ve noticed a new island of work at the end of the day. Sometime around 9 p.m., I’ll open my computer and see that I have about a dozen urgent-ish emails and Slack messages. So, while in front of the television or with a podcast playing in the background, I’ll spend a late-night hour or more replying to these messages, typing the same intro over and over: ‘Sorry for the delay …’ ‘Oops, I missed this …’ ‘Hey, just seeing that you …'”

Oy vey. What even is an “urgent-ish” email? If someone is sending it at 9pm, could it not wait until 8am the following morning? Also, why the apologies? Apologies for not replying instantly? For having a life? A family? WTF.

The “triple peak” day is the idea that workers have three bursts of productivity: one in the morning around 8am, another around 3pm, and another one around 10pm. But when you actually look at the graph itself, the data speaks for itself: 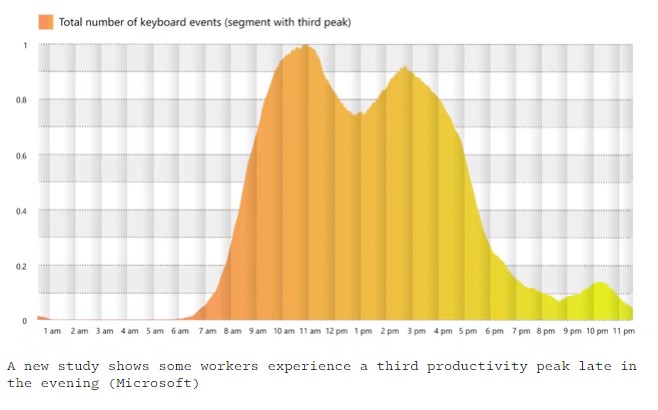 From a data analytics perspective, if someone presented this to me and said, “Wow, it looks like a lot of people start working again at 10pm, huh?” I don’t think I’d agree. For the most part, work is still happening between core hours of 8am and 6pm. I mean, there are even a few people logging on at 1am but that doesn’t make it a trend. It also does not appear that they are doing as much activity at 10pm as they did at 8am.

One thing I will agree on is this: “That’s the positive spin on Microsoft’s findings: Flexible, remote work allows people to move the day around and match productivity to inspiration. But the triple peak isn’t all positive.” -Derek Thompson

Yes, of course, WFH and a flexible schedule allows for people to set their own hours. Not everyone is keen on being butt-in-seat from 8 to 5. Some people are night owls and others are early birds. If someone wants to work at 6am because that’s what they want to do, cool beans. But if someone is up at all hours because they are stressed out and scared of retaliation if they, like, sleep at night and eat breakfast in the morning before work, that’s a problem.

“‘People have 250 percent more meetings every day than they did before the pandemic,’ says Mary Czerwinski, the research manager of the Human Understanding and Empathy group at Microsoft. ‘That means everything else—like coding and email and writing—is being pushed later.’ Workday creep and meeting creep aren’t two separate trends; they’re the same trend.” -Derek Thompson

“We need a deeper theory of work and time. When we say ‘That meeting should have been an email,’ we’re not just saying ‘My boss wouldn’t stop talking.’ We’re also saying ‘I think the information from that synchronous event would have been more productively shared as an asynchronous communication, so that an hour of necessary work wasn’t shifted later into the workday.’ Our late-night mini workdays are not just an expression of benign flexibility. They’re also the consequence of inflexible managers filling the day with so many meetings that we have to add a ‘worknight’ to do our job.” -Derek Thompson

-At some point, the pendulum will swing. Extreme market conditions do not last forever. The Great Resignation will come to an end and it will happen very fast indeed if we fall into a recession. A couple of days ago, I was talking to my friend, Eric, about the insanity of the real estate market and we were musing on the benefits of age and experience. We both lived through the The Great Recession and remember what it was like when a plethora of houses went into foreclosure. So if a realtor is telling you that this sellers’ market will last forever and there will never, ever be another housing market crash, please treat that with a healthy sense of skepticism. The same is true of the job market. We will not always be in a candidate-driven market. So if you are a W2 employee, I would encourage you to pick a place you genuinely like and where you feel like the vibe is a good match for your own. This is good advice for any time – it’s good to feel happy and appreciated. But even more so now because we just don’t know how much longer this ride will last. I hate to sound so bearish, but I am. Wall Street is finally saying, “Yeah, OK, a recession is coming.” (Duh.) I think it’s advisable to find a place you like, plug in, and be ready to stay a while.

-If you are a freelancer or you own your own business, it is your responsibility to determine the rules of engagement and then require adherence. No one else can do that for you. And if you leave that up to your clients, every project you do will be higgledy-piggledy because you are not setting your own standards. “OK, this one wants me on Slack all day. That one wants everything by email. This one wants to blow the phone up every 5 minutes. That one wants a ‘status meeting’ every Friday at 8am which I friggin’ hate…” You’ll wind up with the kind of daytime-work-bleeds-over-into-the-night situation described in The Atlantic. If that’s not how you want to live, put your foot down and set good boundaries.

-Be wary of any study or article that tells you most office workers want to RTO or work a hybrid schedule. And most especially be wary if those studies or articles have a corporate sponsor. Methinks even this idea of “Well, if you work from home, you have to log on at 10pm to check for ‘urgent-ish’ messages and if you come on back to the office, you can be asleep or watching Netflix at 10pm instead…” sounds like Mephistopheles offering to serve Faust so long as he signs their contract in blood.