Posted at 12:00h in Uncategorized by Sara Causey 4 Comments

Photo by Dev Asangbam on Unsplash

Much like the salary lowballing post that went viral earlier this year, an article from Bloomberg Opinion has done the same and not because people are happy about it. You can read the op-ed in its entirety here: https://www.bloomberg.com/opinion/articles/2022-03-13/inflation-stings-most-for-those-earning-under-300-000?sref=ZtdQlmKR. That said, the summary on Twitter pretty much says it all: 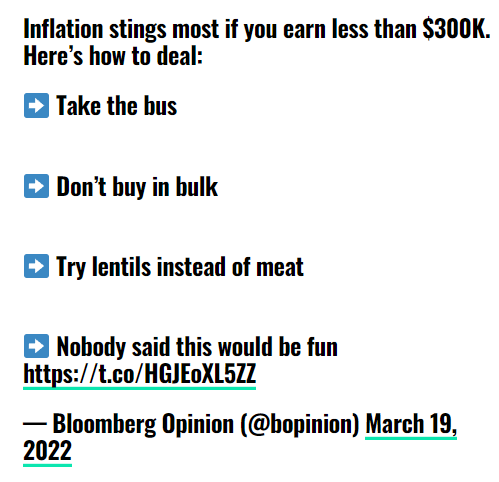 Although there’s also advice about not giving chemotherapy to your pet with cancer, so consider that, too. 😣

The Miami Standard hit back with an op-ed of its own: “‘Eat Lentils Instead of Meat’ – Bloomberg News Tells Peasants Earning ‘Less Than $300K’ How to Deal with Inflation.” (https://miamistandard.news/2022/03/19/eat-lentils-instead-of-meat-bloomberg-news-tells-peasants-earning-less-than-300k-how-to-deal-with-inflation/) Peasants is the correct word because this nouveau feudalism seems to be the wave of the future. From an HR perspective, I feel like this is the kind of thing I’ve been preaching about on both my podcast and in these blogs. Whether it’s cult-like tactics used by Corporate America or the growing disconnect between C-Suite execs and employees, this type of “rules for thee, but not for me” mindset is something I really, deeply want to expose. (“Come on back to the office and sit in an open, hot-desking environment with no walls while I watch you on a camera from the comfort of my closed-door office. Or the golf course.”) Employers are quick to whine that it’s the candidates: no one wants to work nowadays, ___ generation is just lazy, everyone is entitled, no one respects their boss anymore, etc. And some of them would rather blame everyone else than examine their company culture, the work environment, the standards they set, the attitudes of management, and so on. Then they wonder why they have high turnover and difficulties with hiring! Good grief.

Recently, I was in the feed store picking up a few things and the cashier was particularly chatty. But some conversations are meant to happen. We got on the topic of the Great Resignation and she told me, “I have work history in retail and I applied all over town. I can only work daytime hours because of the schedule my kids are on, and this place was the only one that even bothered to call me back. No one else even responded to my applications.” It reminded me of the man in Florida who applied to 60 jobs and only received one interview. According to the applicant, Joey Holz, 16 employers responded, 4 had a telephone call with him, and only one blossomed into an actual job interview. So is it that no one wants to work, entire generations of people are irresponsible lay-abouts, blah blah blah, or is it that a lot of these employers are cutting their own throats?

Then we have tone deaf commentary telling us peons to eat lentils and let our pets die in an editorial piece that sounds like it was commissioned by every horrible manager in Corporate America rubbing their hands together and smiling eerily like Mr. Burns on The Simpsons. (In a tweet by @HeidiBriones, Heidi points out that $299K is apparently the new poverty line according to Bloomberg. Holy smokes!) The author of the Bloomberg op-ed responded to the backlash by saying, “Anyone who is responding to my Bloomberg piece should actually read the article. Inflation is wildly regressive. And so is the Federal Reserve’s response. You can’t solve inflation with rate hikes.” I agree that it’s important to read any material for yourself and in its entirety, which is why I linked to it at the beginning of this blog post. But Chelsea Steiner has an excellent reply on The Mary Sue:

“Okay, but that’s not why people are pissed off at you. They’re pissed because you told them to kill their dogs, eat lentils, and sell their cars. It’s the patronizing and cruel tone threaded throughout the entire article. It’s literally ‘let them eat cake’, except people actually like cake. Rich people really will do anything to avoid paying their fair share of taxes.” –https://www.themarysue.com/bloomberg-op-ed-roasted-for-out-of-touch-inflation-hot-take/

It reminds me of George Carlin’s sage observation:

“You know what they want? They want obedient workers. Obedient workers. People who are just smart enough to run the machines and do the paperwork, and just dumb enough to passively accept all these increasingly sh*ttier jobs with the lower pay, the longer hours, the reduced benefits, the end of overtime and the vanishing pension that disappears the minute you go to collect it, and now they’re coming for your Social Security money… It’s a big club, and you ain’t in it. You and I are not in the big club. And by the way, it’s the same big club they use to beat you over the head with all day long when they tell you what to believe…” –https://www.youtube.com/watch?v=Nyvxt1svxso (NSFW, obviously)

Recruiters admitting to salary lowballing candidates to the tune of thousands of dollars.
Candidates applying to dozens of jobs and not even getting a response.
Just shut up and eat lentils on the bus. And let the family dog die.
Come on back to the office and sit in a cube because: company culture.

And then employers wonder why there was and still is a Great Resignation.