Posted at 12:00h in Uncategorized by Sara Causey 1 Comment 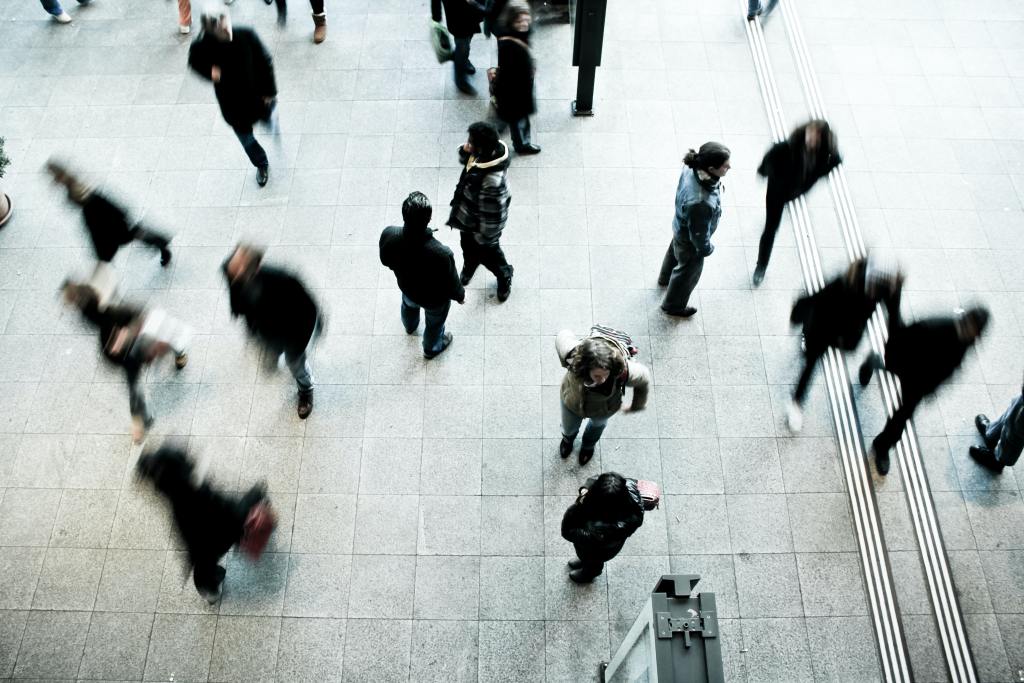 Photo by Timon Studler on Unsplash

Yesterday, I read a disheartening but not surprising article on LinkedIn: “Most workers don’t feel valued,” which you can find here: https://www.linkedin.com/news/story/most-workers-dont-feel-valued-4711849/.

There’s something I want to draw particular attention to here: “However, it also marks a return to pre-pandemic attitudes, when typically just a quarter of people thought their company cared about their wellbeing.” (emphasis mine)

I believe this has a direct connection to companies trying to force the issue of “It’s time to come on back to the office now.” This week, I’ll be publishing a podcast episode about how the Great Resignation is, indeed, still happening. Yet I see companies in denial of this. They want to pronounce that Covid is over. The Great Resignation is over. And it’s time to go back to the way things were before: Dress up. Have a long commute. Sit in a Cube Farm. Do this for 40+ years and wait for death.

Umm, how about NO WAY on that. The genie has been let out of the bottle. We all know that a great deal of office work can be performed from home. We’ve also had time to contemplate big picture issues (including our own mortality in the face of a pandemic) and we decided that sitting in the Digital Panopticon trying to impress a micromanager boss is just, well, not worth it.

In the comments section of this article, I thought T.J. Rosboril made a great point: 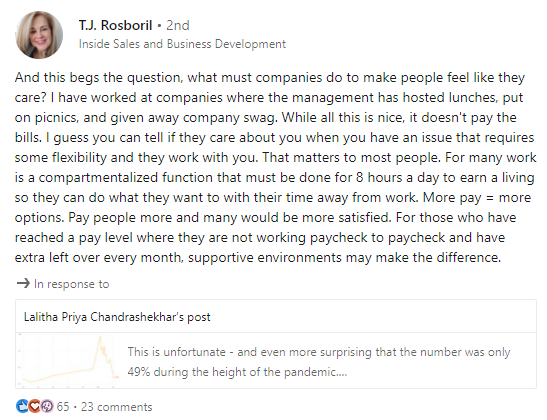 Anytime I’ve been on a job interview and the hiring manager has said, “I’m super flexible. I really don’t have many pet peeves at all. I’m really particular about punctuality but that’s it. Always be five minutes early and you’ll be fine.” Without exception, anyone I’ve ever interviewed with who claimed they were laissez-faire about everything except time was full of it. Sometimes in life, the best laid plans go awry. You get stuck in a multi-car pile-up. You get a flat tire. Your child decides to become a font of vomit before you need to leave for work. Sh*t happens. Managers who will chew you out about these things will most certainly micromanage you and mistreat you over other things as well. So I think T.J.’s point about flexibility is key.

T.J.’s point about money is important, too. Earlier this month, CNBC published an article stating that 64% of Americans are living paycheck to paycheck. (https://www.cnbc.com/2022/03/08/as-prices-rise-64-percent-of-americans-live-paycheck-to-paycheck.html) Anuj Nayar from LendingClub is quoted in the article:

“‘We are all seeing the cost of everything shooting up,’ said Anuj Nayar, LendingClub’s financial health officer. However, paying more for gas and groceries is hitting households particularly hard, he said.

Even among those earning six figures, 48% said they are now living paycheck to paycheck, up from 42% in December, the survey of more than 2,600 adults found.”

But here’s the thing: you actually may not have to commute, depending on the work you do. If you have an office job and have been successfully working from home for two years and your employer is doing the “come on back to the office” routine and you’re looking at the price of gasoline thinking, “No freakin’ way,” you’re not alone. 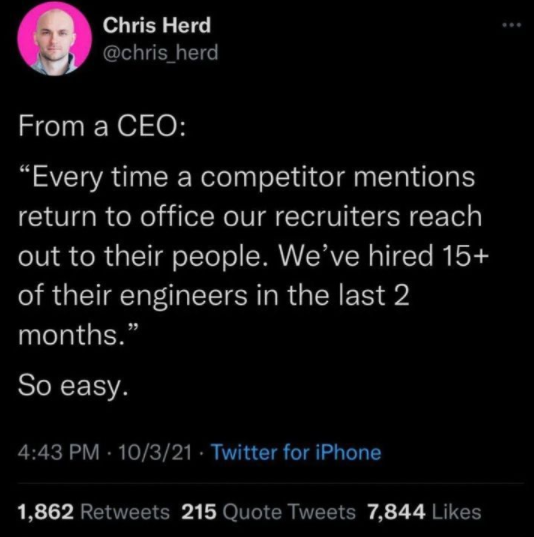 He also has some great posts about CEO’s wanting people to come back because it’s a giant power trip. (Which is true.) You can follow his account here: https://twitter.com/chris_herd

A couple of weeks ago, CNBC published an article titled, “Making sense of why executives are eager to get employees back in the office.” (https://www.cnbc.com/2022/03/08/return-to-office-why-executives-are-eager-for-workers-to-come-back.html) The key points under the headline say it all:

An executive-employee disconnect? Imagine that. LOL. 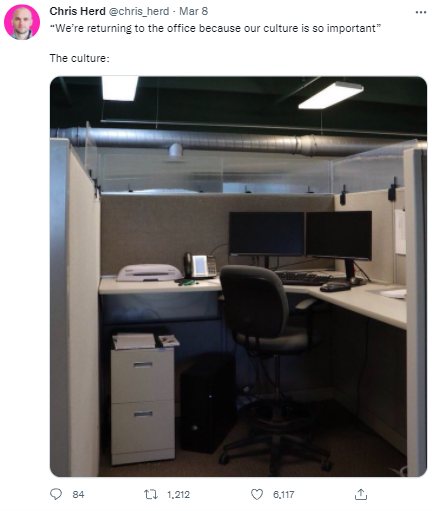 Yeah, that Cube Farm culture sure is pivotal to your operation. 😆

Further down in the CNBC article, they offer a telling statistic:

“Among executives who have primarily worked completely remotely through the pandemic, 44% said they wanted to come back to the office every day. Just 17% of employees said the same.”

44 percent of executives want to go back because they are the head honchos. These individuals are excellent at implementing strategies for the peons that they themselves do not have to live with. Some of these include:

Meanwhile, the CEOs have an office with total privacy and can work with the door closed anytime. They can also come and go as they please and do not have someone timing their lunches or bathroom breaks.

“‘Executives have a better setup at work,’ said Elliott. ‘They probably have an office with a door. They probably don’t have the same child care issues as many employees. The risk that we run, as a society, even in a hybrid-work setting, is executives don’t listen to employees looking for flexibility and a real proximity bias sets in among people who are at the office and those that aren’t.'”

It’s like a feudal lord telling his peasants, “Pardon me, but it’s time for thee to come back to mine fields and work them for me! I’ll be sitting inside watching all of you commune with one another in person from the comfort of my mansion.”

Also in the CNBC article, Amy Zimmerman, the chief people officer at Relay Payments, tells a story that made me barf a little:

“‘I’ve worked with a CEO who told me he just liked the energy of the office,’ said Zimmerman. ‘There was something about seeing the cars in the parking lot that brought him joy. The fact is, corporate America is likely changed forever. You’re making a huge mistake if you’re requiring folks back in office full time, because they see the progress most companies have made in the last two years, and they’ll ask, ‘why?’ It feels like micromanagement.'”

Yeah, I’m gonna hazard a guess that the cars in the parking lot brought him joy because he just saw dollar signs. All of these people are here toiling away to make money for meeeeeee!

But the second part of Amy’s statement is not lost. It is true, I think, that Corporate America has been changed and it’s also true that requiring people to come back represents micromanagement. It does not “feel like” micromanagement – it IS micromanagement.

If you read my blogs or listen to my podcasts regularly, then you know I am not afraid of bold statements and bold predictions. I think the future of work will become more gig-related and independent in nature. Not that everyone will give up on full-time, W2 employment, but rather, more full-time employees will demand to be treated as humans rather than robots and will leave if that basic respect is not given.

As well they should.